Pretties For You Era

Pretties For You is the 1st Alice Cooper Group album and was released way back in 1969. The Alice Cooper Group had already been in existence for about 5 years (previously masquerading as The Earwigs, The Spiders and The Nazz) but now, under manager Shep Gordon and producer Frank Zappa, they finally had the means to record and release their own albums.

Listening to tracks like 10 Minutes Before The Worm and No Longer Umpire, it’s hard to conceive that the group playing on Pretties For You is the same one that became a global sensation a few years later. What we have here is a raw, experimental Alice Cooper, yet to truly find their identity or benefit from Bob Ezrin's subsequent influence as producer. It’s easy to see how the group was capable of dispersing audiences at live shows in 10 minutes as the music is a jumbled mess of psychedelic randomness, a real assault on your mind and body! One review, by Lester Bangs of Rolling Stone magazine, famously described Pretties For You as "a tragic waste of plastic", which was more than a little unfair given the sheer creativity on offer and the blatant disregard for the status quo at the time.

In keeping with the oddity of the music, the album's front cover is derived from artwork by Edward Beardsley, of a girl showing her panties at a funeral, that was hanging on Frank Zappa’s house (see image below)! 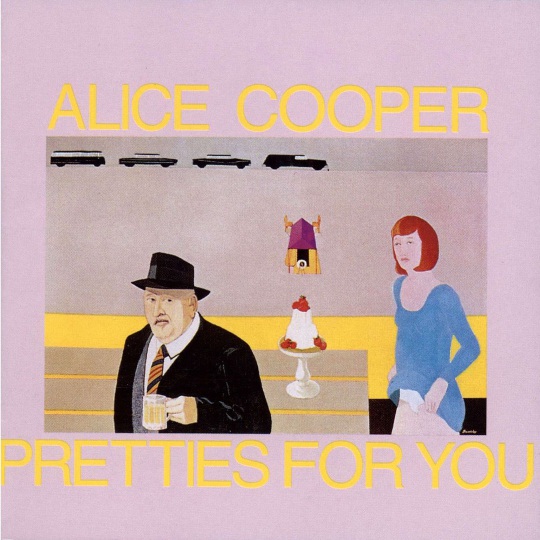 Pretties For You Album Cover 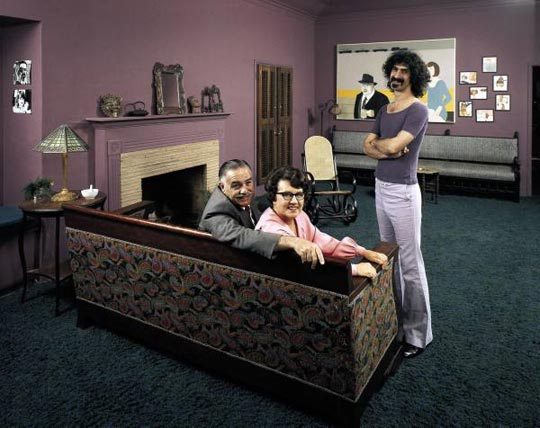 The original 'Pretties For You' painting at Frank Zappa's house (image from worleygig.com)

Pretties For You 12" Promotional Vinyl Album

This USA 12" 1st pressing promotional vinyl album comes in a gatefold sleeve and features the iconic Ed Beardsley artwork (see above) on the front. Inside are individual images of the Alice Cooper Group members, track listings and credits. Interestingly, Vince Furnier is named 'Alice Cooper: vocals and harmonica' whereas the vinyl labels state 'All selections written and produced by Alice Cooper' (an early hint of the way things would go). On the rear of the sleeve is a colour image (by Ed Caraeff) of the Alice Cooper Group in full glam regalia standing in front of some futuristic art pieces at a Californian gallery.

As this is a promotional copy, it includes a 'PROMOTION - Not For Sale' sticker on the front and white 1st generation Straight vinyl labels that feature the additional text 'Promo Not For Sale' on either side.

Several pressings of this album were censored, with a sticker placed over the woman's underwear. This copy did not suffer such a fate with no sticker, or sticky residue (if removed), like you will find on some copies.

This USA 3rd pressing of Pretties For You is identical to the above version but features 2nd generation Straight vinyl labels. It is notable for having the original pressing code on the sleeve (i.e. STS 1051) and the Warner Brothers code, used for future releases, on the vinyl labels (i.e. WS 1840).

This UK 1st pressing of Pretties For You features a slightly different sleeve to the USA version (above), with an alternative Straight logo on the front and back (complete with embedded product code) and the credits on the inside shortened slightly and set against a solid blue box (presumably, to make them easier to read). Also, the rear of the sleeve has some additional playing guidance from the manufacturer added at the bottom and set against a black box.

This German 1st pressing of Pretties For You features an almost identical sleeve to the UK version (above) only with different presentation of the alternative Straight logo on the front and back (with product code now seperated elsewhere). Also, the additional playing guidance text on the back is now in German.

It also features the unique-to-Germany pink, white and black 2nd generation Straight vinyl labels, which only appeared on one other Alice Cooper album, Love It To Death (Easy Action did not see such a release for some reason).

This USA vinyl re-issue of Pretties For You is identical to the original pressings (above) only that the disc features green Warner Brothers labels. This makes for an interesting hybrid release, as the sleeve still promotes it as a Straight release under the product code STS 1051.

My understanding is that all the front covers of this pressing were subject to censorship, with a sticker placed over the woman's underwear. My copy does not have this sticker, although there are faint signs of residue present where it is likely to have been found. An example image of a censored copy is provided below.

Picking up a decent condition vinyl copy of Pretties For You, at a good price, is not easy. Thankfully, Rhino Records re-issued the album in the USA on chunky 180 gram vinyl in 2009. Similar versions were also produced for the Easy Action and Love It To Death albums.

This is a rather basic reproduction, with a simple card sleeve in place of the original gatefold design. Additionally, the vinyl labels feature the latter 'Palm Tree' Warner Brothers design. Nevertheless, this, or one of the subsequent re-issues (below), are definitely worth obtaining to use as a playable copy of this iconic album.

This 'Collectors Limited Edition' USA vinyl re-issue of Pretties For You is the same as the above version only that it features a hype sticker on the front and a transluscent red disc. Similar versions were also produced for the Easy Action and Love It To Death albums.

This 140 gram USA vinyl re-issue of Pretties For You features a gatefold sleeve design that closely resembles the original release (above) and a partially translucent red disc. This version features olive green Warner Brothers labels and is understood to have been limited to 6,000 copies.

It was released as part of the 2017 'Rocktober' event along with re-issues of Love It To Death and Special Forces, all of which followed on from the 2016 Rocktober re-issue of Billion Dollar Babies.

NOTE: Further vinyl copies of this album are featured in the Compilations section of this website.

Pretties For You 8-Track Album

This USA 8-track album features a black cartridge and includes the original album cover artwork and track listings on the front. The wrap-around sticker also provides the product code and address for Warner Brothers' Burbank offices in California on the side.

One notable aspect of this release is that the track order is different to the usual arrangement, with the majority of the them appearing out-of-place. This was presumably due to the need to adequately fit everything into the four 'programs' on the cartridge.

NOTE: A further 8-track copy of this album is featured in the Compilations section of this website.

Pretties For You Cassette Album

This Canadian cassette of Pretties For You includes abridged artwork compared to the original vinyl version (above), track listings and credits. Inside is a clear tape with printed additional track listings.

Pretties For You CD Album

This European CD version of Pretties For You comes in a jewel case and features a basic fold-out booklet containing the artwork from the original vinyl release (above), track listings and credits.
Discogs Link: Click Here

In 2011, all the Alice Cooper albums from Pretties For You through to From The Inside were re-issued in Japan on 'Super High Material' (SHM) CD format. SHM CD's are, apparently, made of improved material, that provides a clearer medium for the reading of the data and so reduces read errors and thus can improve sound quality.

A notable feature of all the SHM releases is that they closely replicate the original packaging of the vinyl releases. In the case of Pretties For You, this is a fairly basic gatefold sleeve, so this is obviously reflected here. An additional black-and-white bilingual lyric booklet and external 'Obi Strip' are also provided (both of which are common features of Japanese music releases).

What would have been really cool though is if they had made the CDs look more like minature vinyl discs. What is offered is still more than satisfactory though and the SHM releases are definitely the quintessential Alice Cooper CD editions of all the available variants out there.

NOTE: Further CD copies of this album are featured in the Compilations and The Studio Albums 1969-1983 sections of this website.

I'm very lucky to have been gifted this fantastic USA promotional copy of the very first Alice Cooper Group single, Reflected, by hardcore Alice Cooper Group fan Chris Daniels. Chris has a marvellous collection of records (probably the finest in the UK) featuring many rare releases. Such is the strength of Chris' collection, he was generous enough to give me this copy when he learned that it was in my Top 5 list of Alice Cooper releases that I wanted to have. I am very lucky indeed to have a good friend like him and am forever grateful for his kindness in helping me achieve this major collection goal!

This vinyl just oozes history (about 50 years, to be precise) with the cult Reflected on Side A and Living on Side B (both from the Pretties For You Album). In keeping with the original album release (above), we are also treated to 1st generation Straight labels and 'Bizarre Music' copyright text (the only time they appeared on an Alice Cooper vinyl single).

Pretties For You Live In New York City DVD

In November 2015 music artist Nick Didkovsky (and founder of the band Doctor Nerve) was offered a week long residency at the experimental and intimate New York music venue The Stone. This DVD captures one of these performances, which had huge relevance for Alice Cooper Group fans.

As a massive fan of Pretties For You, and having never experienced live versions of the albums' songs (and let's face it, very few people did as they stopped playing this material in ~1970), he took the opportunity one night to perform the entire album from start to finish in front of a live audience (including some hardcore Alice Cooper Group fans from around the world). Also joining them, were very special guests Dennis Dunaway and Neal Smith from the original Alice Cooper Group, both of whom provided expert advice during the pereperation of the show. Cindy Dunaway Smith also produced an excellent Pretties For You inspired shirt, which Nick wore (and is pictured on the DVD).

The outome is an outstanding live interpretation of the album which is a more-than-worthy substitute for the lack of anything similar from the Alice Cooper Group. Paul Bertolino (who performs with an Alice tribute band called My Stars) makes a great young Alice and after a while you begin to think that you are actually watching the original Group. To top off proceedings, Dennis even joins in for the Encore, which features the Pretties For You demo Nobody Likes Me, Yeah Yeah Yeah and You Drive Me Nervous (both from the Killer album).

I have since managed to get the disc signed by Dennis Dunaway and Cindy Dunaway Smith (when they visited the UK in November 2017).