The Snakes Come To London Town 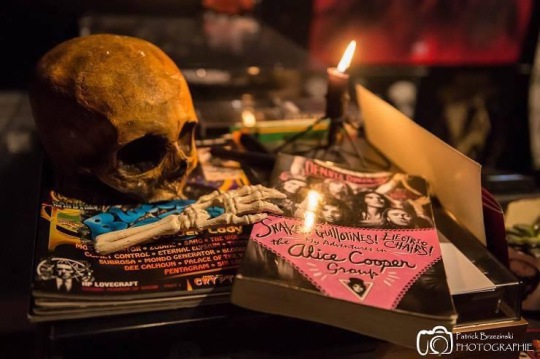 Photo provided with thanks by Patrick Brzezinski

Friday 17th November 2017 will long be engrained in my memory, as it was the night that Dennis Dunaway's Snakes! Guillotines! Electric Chairs! show came to a bustling street in Bethnal Green, East London, just a slither away from the twinkling skyscrapers of the UK capital's financial heart.

The venue was the mysteriously titled Crypt Of The Wizard, a pint-sized heavy metal store on Hackney Road (run by devoted metalheads Charlie Wooley and Marcus Mustafa) that opened its doors to music fans in 2017 and exclusively specialises in vinyls and cassettes by the likes of Iron Maiden, Bolt Thrower and Twisted Sister.

It was clear from the off that this was going to be a very intimate night with fans almost obliged to get to know the people that they were going to be (quite literally) rubbing shoulders with! 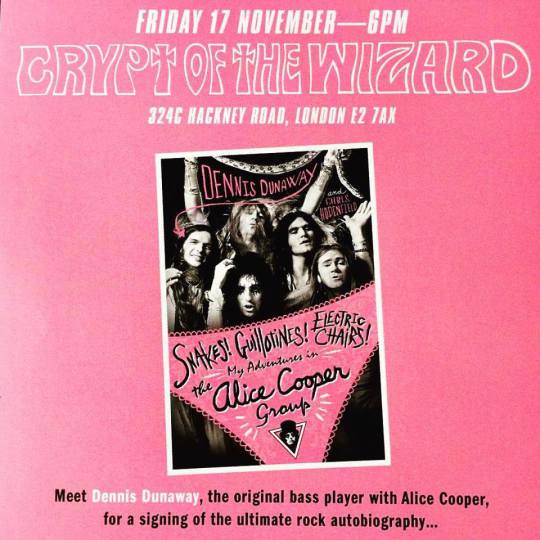 Winding back a few weeks, and as we approached the date of the book signing, my excitement grew exponentially and I couldn't resist helping to build the hype a little by posting light-hearted images on the excellent Snakes! Facebook group (sadly Her Majesty never made it):

The day finally arrived and I set off from the South West of England early in the morning and arrived at the venue for 13:00, taking in the surroundings, browsing through the entire music collection and bagging myself a cool Crypt Of The Wizard T-shirt. I had to take great care during the 200 mile journey, as I had to carry something very delicate (more on that below). Thankfully, I made it there with no issues and Marcus kindly let me stash my surprise in a cupboard!

I was shortly joined by a few other hardcore fans, including John from Birmingham who was rocking a great custom Alice Cooper leather jacket and Jake, a 20(ish) year-old from Bristol who idolises Dennis and was full of nervous energy at the thought of meeting him and having the scratch plate from his bass guitar signed. Yes, you heard it, Dennis Dunaway continues to inspire folk nearly 50 years his junior after all this time (Jake is a massive fan of Pretties For You). Kudos to you Dennis! 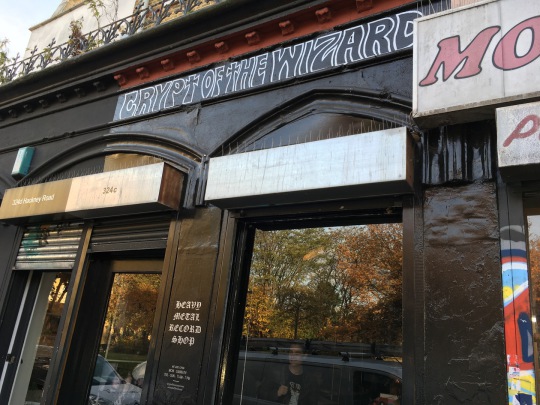 The Crypt Of The Wizard 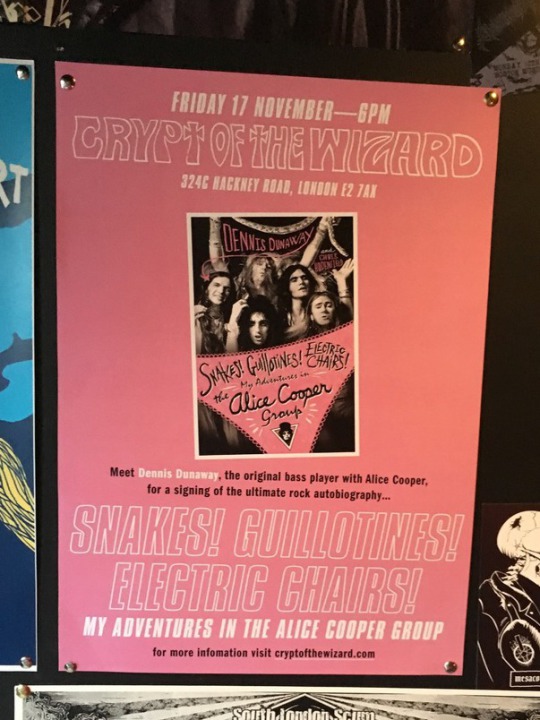 Event poster in the store

After several great and varied conversations with fellow fans, 6pm quickly came and we were ushered into a line in anticipation of Dennis' arrival. One bonus of getting there so early was that I got to be 2nd in line and that meant that I could escape the increasingly cold November air in favour of the cosy surroundings of the store itself.

It shortly became clear that Dennis was running a little behind schedule. Was he still basking in the glory of the final UK Tour date at Wembley the previous night? Perhaps he and his wonderful wife Cindy were finishing off dinner? Or maybe they were just stuck in London's notoriously bad traffic! No-one really cared though as we were all having a good time thanks to the ongoing banter and the fascinating stories being exchanged.

Soon our wait was over and Dennis, Cindy and co arrived with little fanfare (which I prefer to call respectful silence). A load of boxes containing paperback copies of Snakes! also arrived and were quickly opened by Charlie and Marcus in preparation of the festivities ahead. Dennis made himself comfortable and he then got underway signing John's book and leather jacket!

It became instantly clear how engaging Dennis and Cindy were with their fans and also how generous they are with their time. Fans only had to pay the recommended retail price (£16.95) for their book and in return they got a warm handshake from Dennis, photos with him and Cindy and at least three signed items (in the book he also dedicates the autograph to you and adds in a popular song lyric). Not too shabby when you consider that it's hard to get near his best friend Alice for anything less than about £500 these days! Also, and if you so wish, you can go to the back of the line and he'll gladly sign a few more things for you. What a legend and hardly a surprise, therefore, that there were a few guys who had come over all the way from Germany just for the event!

The items I got signed, plus a few other things I scored are shown below:

To celebrate both the historic UK Tour and the 1st anniversary of a landmark, award winning release, my wife (Sarah-Jane) and I took on the challenge of making some replica Live From The Astroturf cookies!

These were a labour of love with edible vinyl stickers produced and each of the variants from the UK Tour Editions faithfully replicated in all their glory (we couldn't work out how to make a translucent pink Good Records edition from the original release, so came up with the above dodgy excuse). I joked to those attending that they actually played I'm Eighteen when you placed them on a turntable!

I somehow managed to transport them safely from Exeter in the South West of England to East London (via the Underground) and presented them to Chris Penn, the mastermind of Live From The Astroturf, upon his arrival. They went down a storm and even Dennis and Cindy admired them before enjoying a few bites!

The cookies even made one of superfan Paul Brenton's articles covering the UK Tour in The Music Express (thanks Paul). 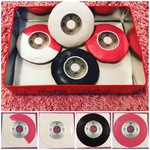 Another massive bonus of the night was finally getting to meet superfan Chris Daniels. He is the appointed President of the 'Live From The Astroturf Appreciation Society' having amassed an incredible 12 different copies (including 1 of all 9 available variants). No fan can demonstrate a better collection and we had a great time chatting about the release and our love for collecting Alice Cooper records in general.

It was especially cool to see Chris secure his 12th copy of Live From The Astroturf at the book signing itself. This was a stunning Good Records copy (#146) that Chris Penn had managed to get signed by all 4 surviving members on the front in silver pen. For a few seconds I contemplated grabbing it and doing a runner!

That would have been massively harsh though as Chris had just treated me to a wonderful gift from his personal collection. These were three original 7" I'm Eighteen / (Is It My) Body singles on both the Warner Brothers (one standard issue and one white label promotional copy) and Straight Labels. He had known for a while how keen I was to build my collection in this area and I was absolutely bowled over when he handed them over. He's another absolute legend and I definitely owe him a favour or two!

The other cool thing about the night is that we discovered that, including myself and Chris, we had four owners present of the ultra-rare Bizarre label Easy Action 12". I think it's fair to say that's a very rare occurrence!

As always seems to be the case when you're having fun, time just flew-by and before I knew it I'd gone past my 9pm deadline to head back to Paddington station for my 10pm train home. I quickly and regrettably made the dash back but the Underground took forever (damn late-night services) and I subsequently missed it by 1 minute!

That resulted in a 2-hour wait for the Red Eye 'sleeper train', a £50 excess ticket charge and a difficult call home to arrange a pick-up at 03:00 in the morning rather than 01:00. Sarah-Jane was great about it though as she knew how much the night meant to me, plus I found a warm pub to sit-back and think back to the night just gone.

So, there you have it, a totally awesome night to end an unforgettable week that started with a trip to Glasgow to see Dennis, Alice, Neal and Mike get back together for their first run of shows in 43 years. I don't think it gets any better than this, but I do sincerely hope that I'm proved wrong!

Thank you Dennis, thank you Cindy and "Good To See You"...

The legendary Chris Penn took the effort to film most of the evening and you can view the action by following the following links. Chris spent most of the night with his arm in the air holding his phone so kudos to him as well!