This promotional CD comes in a simple wrap-around paper sleeve and features all the material from the album, including the 2004 Athens Olympics soundtrack song Stand as a bonus track.

This promotional CD album has the same number as the above version but does not feature the same artwork. Also, instead of Stand, the bonus track is the hard-to-find The Sharpest Pain, which only featured on the official album releases in Russia and Australia (in the case of the latter, I believe it wasn't actually included in the printed track listings).

This promotional CD album comes in a jewel case and features all the material from the album, including the bonus track Stand. The rear of the case features track listings plus contact details for radio and publicity.

This promotional CD album comes in a jewel case and features all the material from the album, including the bonus track Stand. The rear of the case features track listings and announces the release date as August 02nd 2005.

This UK version of Dirty Diamonds comes in a jewel case and includes Stand as a bonus track. The CD and image on the back of the case have striking images of Alice dressed in black and set against a bright red background.

The 12-page booklet features song lyrics, credits plus some black and white images of Alice (including one of him playing poker) and, unusually, the touring band as well.

This version comes in a digi-pack and includes Stand as a bonus track.  The 12-page booklet is the same as the UK version (above) with the exception of the front cover, which features a shot of Alice snarling at himself in the mirror.

Dirty Diamonds was not subject to an initial vinyl release when it launched in 2005.  However, this neat edition was released in 2010 by Night Of The Vinyl Dead and was limited to 500 individually numbered copies (this one being #063).  It comes in a gatefold sleeve and features a neat pop-up Alice when you open it up.

Also included is a lyric sheet complete with image of Alice playing poker on the other side.  The black vinyl disc comes provided in a card sleeve featuring an image of Alice on one side and the touring band of 2005 on the reverse. Stand is included as the bonus track.

For those who missed out on the excellent Night Of The Vinyl Dead version of Dirty Diamonds (above), Back On Black released this alternative version a year later. Initially on limited edition translucent red vinyl (like this one), and later on black vinyl, this version isn't quite as nice but still features a gatefold design complete with large image of Alice, track listings, lyrics and credits. Stand is included as the bonus track.

Dirty Diamonds was subject to a 3rd vinyl pressing as a limited edition 140 gram release for US Record Store Day 2019. With only 900 copies produced, this became a sought after release for all Alice Cooper.

As is always the case for Record Store Day releases, copies quickly appeared on eBay and Discogs at vastly inflated prices with many fans forced to shell out well above the $25 retail price. Thankfully, the brilliant Good Records of Dallas, Texas were able to help hardcore overseas fans obtain a copy at the correct price, meaning that they were able to avoid the aftermarket profiteers. Thank you Good Records for looking after real fans!

Back to the release and it's not hard to see why it was so popular. Although the simple sleeve design is the weakest of the 3 versions to date, the lovely transparent 'Blood Splatter' vinyl disc is quite brilliant and nicely suits the albums artwork and theme. Stand is included as the bonus track.

For those who missed the US Record Store Day release (above), New West Records issued a further 140 gram pressing about 6 months later.  This time on translucent red vinyl, and limited to just 1,000 copies, it is otherwise exactly the same as the previous release only that it features a different barcode on the back (that is stuck over the orginal one).

New West Records made it a hat-trick of Dirty Diamonds 140 gram vinyl releases in 2019 with this very limited Black Friday 2019 version. Subject to just 100 pressings, and limited to two copies per customer, this was only advertised on the New West Records website and sold for just $10 per copy. Despite being kept somewhat under the radar, demand was very high with all copies selling out just a few minutes after they became available.

This time on translucent 'Galaxy Black / Red' vinyl, it is otherwise exactly the same as the previous two releases (above) only that it features a different barcode on the back (that is stuck over the orginal one).

Unfortunately, as with pretty much all special edition releases, eBay re-sellers were quick to jump in and make an instant profit and I counted about a dozen up for sale at 10 times+ the original price within 24 hours (see image below). Quite why New West Records allowed people to buy two copies is beyond me, but it at least meant that I could nip in and secure one for myself and another for a fellow collector.

Whether or not this becomes a highly sought-after piece remains to be seen, but with such a limited production run, it's a steal for $10!

Following the multiple vinyl re-issues of this album in 2019 (above and the copy from the Treasures boxset), yet another version of Dirty Diamonds was released in 2020. This time it was a European exclusive edition by Ear Music as part of the October Record Store Day 'Drop 3' event and was limited to 2,000 hand-numbered copies (mine being #0,728).

I think it's fair to say that appetite for this one was already pretty low. To make matters worse, this release was essentially the same as the copy provided in the Treasures boxset only that it featured a translucent red disc (rather than clear), had a unique hype sticker on the front and included the aforementioned hand-numbering (in silver pen, on the rear of the sleeve).

A combination of the above points, and the fact that this was now the 7th pressing of the album on vinyl, meant that it was pretty easy to get hold of a copy at the standard price without having to queue for hours outside your local record store. 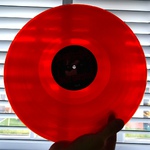 This hard-to-find promotional CD comes in a simple paper sleeve and contains only the album version of Dirty Diamonds. The CD is labelled as SPITCD 257, which is the same as the album.

This promotional CD comes in a jewel case and features Sunset Babies (All Got Rabies) from the Dirty Diamonds album.

The shirt is hand-signed and personalised on the front by Alice.

This 'Platinum Club' 2005 tour shirt was given to fans with ViP tickets to shows and features alternative artwork from the Dirty Diamonds album on the front. The back is blank.

For the Along Came A Spider era click here.