The Breadcrumbs is an EP released in September 2019 featuring 4 covers, a remake of a previous Alice Cooper solo track and an all-new song. It was physically released only as a 10" vinyl (at least initially) but was also made available as a digital download (fans who purchased the vinyl were also able to download the content for free from the Ear Music website).

The 6 tracks included are:

5. Devil With A Blue Dress On / Chains Of Love (a dual Shorty Long and William Stevenson / J. J. Barnes cover); and

Although seen as an unexpected bonus release by most, some fans were slightly dismayed to see Alice perform yet more covers (having also done so with the Hollywood Vampires project and his Raise The Dead Tour) rather than release all-new solo or Alice Cooper Group material. However, all the covers feature Alice's usual personal twist and are presented in stripped down garage rock style, similar to that used on The Eyes Of Alice Cooper.

Speaking of that album, Detroit City 2020 sees Alice revisit the song of the same name from 16 years earlier. Whilst this is a good new version, I have to say that I prefer the original as its chorus was really catchy.

The all new track, Go Man Go, is a punky affair, with plenty of attitude, and it was an interesting insight into the path Alice would take for his next album. 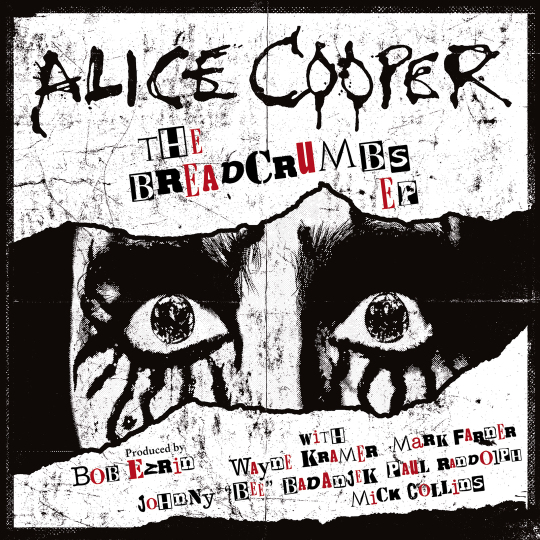 This European promotional 10" vinyl copy of The Breadcrumbs comes in a simple card sleeve. On the front is a replica image of Alice's eyes as originally featured on the inside of the Love It To Death album (only that you can no longer see the rest of the Alice Cooper Group hiding away). On the rear of the sleeve are track listings and credits. The inner sleeve contains similar artwork to the front in alternate red and black print. Inside is a black vinyl disc featuring white Ear Music labels.

The only way to tell that this is a promotional copy is that it is marked as 'Promo / 20,000' on the back of the sleeve. This obviously reflects the fact that the stock release (below) was limited to 20,000 units worldwide, with the hype sticker on the front also communicating this point.

Also provided is a small inlay card that promotes some previous Ear Music Alice Cooper / Hollywood Vampires releases and also advises fans to 'watch out for the new Alice Cooper album in 2020'!

A few months after the vinyl EP was released came this exclusive Japanese CD, which comes in a clear jewel case featuring an Obi strip.

Unlike many other Japanese releases, nothing notable is provided (no bonus tracks sadly). A small black and white booklet containing only Japanese text and an image of Alice is included, with the colour inlay being just a 2-sided piece of card featuring artwork taken from the vinyl release.

Although good to have on CD, there is nothing essential here to really justify spending the money on it.