This cool 1/24 scale die-cast 'Trash Mobile' is based on a 1940 Ford Sedan delivery van and features artwork from the From The Inside album plus a live image of Alice on the packaging. There is good detailing present including an opening bonnet with engine inside and exhaust pipes on the undercarriage.
These were quite hard to come by as they were limited to 2,499 individually numbered pieces (with mine being #1,410). The unique number of each vehicle is printed on the undercarriage.

This 1/64 scale die-cast car is based on a 1937 Cord and features artwork from the Welcome To My Nightmare album on the doors, bonnet, boot and packaging.

The 2nd in this series of 3 1/65 scale die-cast toys is a mini version of the above 1/24 scale Trash Mobile. It is slightly less detailed though and doesn't feature the opening bonnet or some of the other additional detailing.

The 3rd and final Alice Cooper 1/64 scale die-cast vehicle in this series (note: there was no #46 for some reason) is this rather cool 'Insanity Van' ambulance. The model features images of Alice plus his signature on each side along with the phrase "I'm crazy, you're crazy, we're all crazy".  Also included in the packaging is the From The Inside 'Certificate Of Insanity' which is again signed by Alice!

This is a white cuddly bear with classic Alice 'snake eye' makeup and spider shirt and was purchased at a Theatre Of Death Tour UK show in 2009.

This particular design was 'the bear of choice' for several years, as it was sold with multiple different shirts designs between about 2000 and 2005. I have collected images of as many of the designs as I can find below. 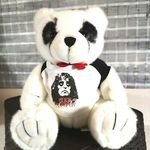 This further bear is understood to have replaced the above design and features a cool shirt with classic glam image of Alice in 4 different colours.

It looks like a few different shirt designs were produced for this bear and I've again collected images of as many of them as I can find below.

This alternative bear has a panda design and is more friendly looking than the previous version (above). It has been sold on the official Alice Cooper store for many years now and is also sold at most tour shows.

This tiny keyring bear mirrors the design of the above product and was sold for a period of time on the official Alice Cooper store.

This is an excellent toy which features a posable Alice action figure with snake plus numerous common props from his stage show including a working guillotine (complete with severed head), top hat crutch, cane and spiders. The attention to detail is great with a pack of dollar bills also included, which can be spiked onto the end of his sword.

The only slight criticism is that the figure itself isn't very easy to stand up, but that shouldn't detract from buying a set to proudly display.

This is a piece featuring a detailed rubber-made Alice wearing a top hat and holding a skull complete with Alice makeup. The presentation of Alice is similar to that seen in The Last Temptation era comic books and live shows.

The box is also very nice, with the artwork of the From The Inside album on the front supplemented by images of Alice in concert on the sides and back. When the button on the front is pressed Alice jumps out to the first few lines of Welcome To My Nightmare.

Randomly, an alternative version of the Alice 'N' The Box was produced. This was exactly the same as the version featured above only with Alice holding his own severed head rather than a skull. Quite why the need was felt to produce 2 different versions is a bit of a mystery, although it was probably so the manufacturer could sell extra units to hardcore fans.

This outstanding action figure by Art Asylum stands a monster 18" high and is suitably detailed to boot. The clothing, cane and face all look great on this highly posable figure, which is identically themed to the Alice 'N' The Box releases (above). You also get the same rendition of Welcome To My Nightmare if you press Alice's chest.

This neat, un-posable, hand painted mini-figure features a From The Inside Tour (1979) Alice complete with trademark leathers (with 'Alice' written on his pants), snake and red codpiece. On the back is an image of Alice live in concert wearing a similar outfit, but this is from the latter The Nightmare Returns tour (1986).

In 2012 Alice attended a Phoenix Coyotes 'Military Nights' ice hockey match. To mark the occasion, an incredible 10,000 one-off Alice Cooper Bobbleheads (complete with Coyotes-themed box) were handed out to fans for free. This seemed a rather odd pair-up and it's sad to think that many of these were probably broken, lost or simply thrown out by non-Alice fans.

For those that missed out on the Coyotes Bobblehead (above), Alice's sports bar 'Cooperstown' decided to produce their own limited run of 1,500 units using the same moulds. These much rarer versions are similar to the Coyote ones only with a different coloured shirt and the Cooperstown logo instead of the Coyotes one. They came packaged in a simple plain white box with a sticker on the front.

In 2013, a further design was made available on the official Alice Cooper store. This rather splendid version comes in a plain box and features Alice in stage clothing complete with blood stained shirt, top hat and skull cane!

This Lego-style action figure is based on Alice from the Constrictor era. This particular version appears to be a pre-release sample due to a sticker with manufacturer comments on the back. Included in the box is a stand, a sword to put in Alice's hand and a small booklet.

2 further variants of this toy were proposed, with prototypes produced based on Alice from the Fistful Of Alice live album and the Brutal Planet live shows. A photo of the former is included below, whereas the only photo I've ever seen of the latter is featured in Dale Sherman's excellent 'The Illustrated Guide To Alice Cooper, 10th Anniversary Edition' book.

This is the same as the above item only that it comes in a blister packaging. As with the other version this also appears to be a pre-release sample due to a sticker with manufacturer comments on the back.

The attention to detail is pretty good with Alice provided with his iconic make-up and the skull logo on the back of his coat.

Funko's 'Pop!' vinyl figure series was launched on 2011 and has since resulted in thousands of large-headed caricatures of real-life and imaginary cultural icons. Their 'Pop! Rocks' sub-brand specifically focuses on music icons with previous releases featuring the likes of Lemmy Kilmister, Axl Rose and Joey Ramone. An Alice-related figure was almost inevitable and in 2018 fans were treated to not one, but two different variants.

This one features Alice, holding a microphone, in iconic School's Out style white tuxedo with matching top hat and cane.

This 2nd Pop! Rocks variant features Alice, again holding a microphone, in iconic straight-jacket. This was available exclusively at Hot Topic stores in the USA but was also freely distributed around the rest of the world.