Super Duper Alice Cooper is a 2014 biographical film by Banger Films about Alice Cooper (the man) and covers the time from his childhood up to the triumphant The Nightmare Returns tour of 1986.

Although the film features interviews with Alice Cooper and a range of musical icons (including Shep Gordon, Bob Ezrin, Dennis Dunaway, Neal Smith, Elton John, John Lydon and Dee Snider) it is notable in that none of them actually appear as 'talking heads'. The film also tackles the lack of video content from Alice's early years by cleverly animating photographs.

The film is also notable in that it touches on areas of Alice's private life that had not been widely covered in the past. Most notably, is the admission that Alice was addicted to cocaine, which nearly claimed his life in the 80's.

A few issues with the film are that (a) it doesn't feature original Alice Cooper Group member Michael Bruce, who was apparently "hard to find" and (b) it's ending point, whilst understandable, means that nearly 30 years of Alice's career is not covered. On the later, this comes across as though there has been nothing notable about Alice's career since 1986 (which some, not me, might argue is a fair point). Of course, there is always the possibility that another film may be released covering his latter years, but it probably wouldn't have the necessary appeal to make it worthwhile.

Overall though, the film is essential viewing for all Alice Cooper fans. 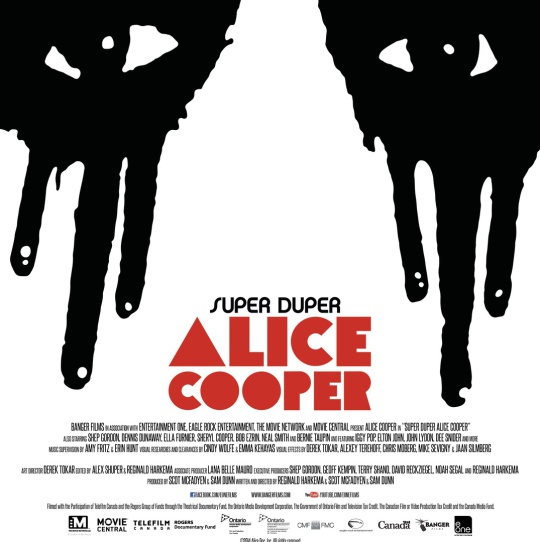 This USA DVD version of Super Duper Alice Cooper comes in a clear case and features the film and a simple booklet, which is a cut-down version of the material provided in the Deluxe Edition (below). This copy is hand-signed by Alice on the front.

This European 'Deluxe Edition' of Super Duper Alice Cooper was sold exclusively by Amazon, is presented in a nice 60-page hardback book and contains a 4-page introduction by writer and producer Ralph Chapman plus a stack of photos of both Alice and the original Alice Cooper Group.

At the back are 4 discs which are the movie DVD, the movie Blu-Ray, a DVD of the partial 1972 Alice Cooper Group concert at Centre Sportif Montreal and an audio CD of the July 2009 Along Came A Spider Tour show at the Montreux Jazz Festival.

This European 'Deluxe Limited Numbered Edition' of Super Duper Alice Cooper was rather expensive at ~£100 and features bespoke poster, T-shirt, panties and Amazon exclusive Deluxe Edition book (see above). It was also limited to 2,000 individually numbered copies (mine being #0,599 of 2,000).

The poster is nice as, like the Classic Rock Welcome 2 My Nightmare Fan Pack, it features the name of everyone who pre-ordered the set (mine is either side of Alice's right eye). Although the book is essentially the same as the Deluxe Edition, the DVD version of the movie is Region 1 (i.e. it doesn't work in Europe, which is Region 2) plus is has the 'Limited Edition' sticker and individual copy number placed over the original barcode.

When you look at what you get for the additional £70 or so over the Deluxe Edition, you can't help but feel a little short-changed. This is especially so when you consider that the Deluxe Edition wasn't announced for sale (for about £30) on Amazon until sometime after this was on the now inactive Super Duper Alice Cooper website.