Along Came A Spider Era

Along Came A Spider is the 25th 'Alice Cooper' studio album and was released in 2008. Following the stripped-down The Eyes Of Alice Cooper and Dirty Diamonds, Alice's latest offering returned to the well-trodden path of a central concept. Here, we follow the exploits of serial killer 'Spider' and his mission to create his very own spider by adjoining the severed limbs of eight female victims (each of whom are subject to his signature move, wrapping them in a ball of silk). This, combined with an excellent mini-movie and promotional artwork generated much excitement amongst fans.

The sad reality of Along Came A Spider, however, is that what it delivers fails to match the hype. There are three principal reasons for this:

Firstly, the album suffers from some really odd production, meaning (much like Constrictor before it) many of the songs simply don't sound as good as they probably should. I Know Where You Live, Wake The Dead, In Touch With Your Feminine Side and I'm Hungry all suffer from an unwanted (and rather inappropriate, given the serial killer theme) happy-clappy background sound making them all seem rather repetitive. Exceptions to this include the notably more polished Vengeance Is Mine (featuring Slash from Guns N' Roses), which would have easily have felt at home on Brutal Planet or Dragontown, and the blistering Catch Me If You Can.

Secondly, some of the song writing is below the high standard you would usually expect for an Alice Cooper album. The rudimentary Wake The Dead, In Touch With Your Feminine Side and I'm Hungry are particularly guilty of this crime.

Thirdly, the story being told simply doesn't flow as it should and comes across as somewhat disjointed and non-progressive. I think the general idea though is that:

> Spider's diary, which details all his killings, is found by 'The Authorities' (Prologue);

> Spider keeps a close eye on his victims as he plans their murders (I Know Where You Live);

> An incarcerated Spider dreams of revenge (Vengeance Is Mine). I'm assuming this is supposed to be following the murders and, therefore, would have been better as the final track? Alternatively, perhaps it's before the murders and Spider is doing time for something else?;

> Spider outlines that he is an emotionless killer with no rhyme or reason for choosing his female victims (Wake The Dead);

> Spider taunts The Authorities to stop him and, interestingly, calls himself an "arachnophobic psychopath" (Catch Me If You Can);

> Spider eyes up his next victims (In Touch With Your Feminine Side and Wrapped In Silk);

> Spider develops an emotional attachment to one of his victims (Killed By Love);

> Spider toys with one of his victims before eventually letting her get away (The One That Got Away);

> Spider has temporary regrets over his killings (Salvation) before defiantly erasing them and completing his mission (I Am The Spider); and

> The delusional Spider informs the recurring Steven character (from Welcome To My Nightmare and The Last Temptation) that they are innocent of his crimes as he's been incarcerated for the last 28 years (Epilogue).

Despite these fairly substantial criticisms, it isn't to say that Along Came A Spider is all bad. In addition to Vengeance Is Mine and Catch Me If You Can, Killed By Love, The One That Got Away, Salvation and I Am The Spider are all really decent (two of them being ballads that largely escape the previously mentioned production issues). Furthermore, there are two great bonus tracks available, Shadow Of Yourself and I'll Still Be There (see below). One can only imagine that a few tweaks to the final cut, some improved production and a more logical track order would have made for a vastly superior album. This is a real shame as Along Came A Spider could have been elevated from an ok album to something much, much, better.

Alice would address this issue on his next album, with the return of a legendary concept, character and producer... 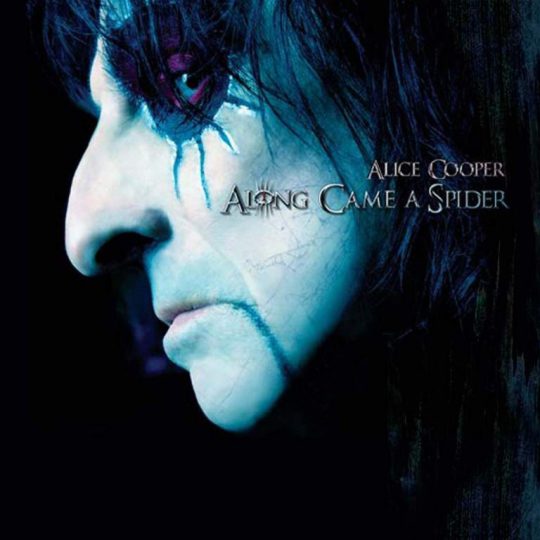 Along Came A Spider Album Cover

Along Came A Spider Vinyl Album

After the sporadic launch day releases of Alice's first four 21st century albums, Along Came A Spider marked the re-introduction of vinyl as a mainstay physical format.

This European release was, however, the only vinyl version produced for this album and appears to have been subject to only a limited (unknown) number of pressings. It is, therefore, quite hard to find copies of it.

It features a gatefold sleeve and includes a translucent clear vinyl disc with custom labels. Unusually, this release features a different front cover to the CD version (below), with an image of Alice / Spider reading an 'Along Came A Spider Book' that is provided in the booklet of the CD version. On the inside are a selection of images of Alice / Spider and his victims and on the back is a further image of Alice along with the track listings.

The inner sleeve (which is the main cover image of the CD version) features a pale, menacing-looking, Alice with exquisitely detailed spider-eye make-up. On the other side are track listings, lyrics and credits.

This '4-Track Radio Promo' CD EP comes in a slimline jewel case and includes a simple paper inlay featuring abridged album artwork. The inlay also states a release date of the full album being 25th July (2008) in Germany, 28th July in Europe and 29th July in the USA. It also promotes the fact that there will be a 'Limited First Edition' CD (90602) and a 'Vinyl' (90601) release.

This is not a full promotional CD and features just 4 tracks, Catch Me If You Can, Vengeance Is Mine, Killed By Love and (In Touch With) Your Feminine Side (all from the Along Came A Spider Album).

Both the CD and inlay state 'For promotional use only. Sale or other transfer is prohibited. Must be returned on demand of record company.'.

This further European promotional CD features the 11-track version of Along Came A Spider (i.e. excluding bonus tracks) and comes in a simple card sleeve complete with blue outline. The CD provides the German, Europe and USA release dates and on the back of the sleeve is an interesting overview explaining the album concept:

Though it is often said about artists with as rich a history as Alice that their newest albums capture the essence of their greatest work, it may honestly be proposed that 'Along Came A Spider' does exactly that. It's got hard rock with hooks, an Alice trademark ("Vengeance is Mine," "I Know Where You Live"), classic balladry, another Alice trademark ("Killed by Love," "Salvation"), and always with an overtone of evil, yet another Alice trademark. Throughout the album, Alice BECOMES Spider, bringing the story of a cold-blooded killer to life vocally, as if this were the soundtrack to an as-yet unmade horror film.

Co-produced by Danny Saber, Greg Hampton and Alice himself, 'Along Came A Spider' manages to marry both vintage and modern day Alice. As theatrical as ever, the album is a sonic combination of familiar Alice musical elements from albums as diverse as 'Billion Dollar Babies' and 'Brutal Planet,' with the storytelling of "Welcome To My Nightmare," capturing the historic dark side of Alice in peak form, an instantly recognizable presence that will be welcomed by his fans. Joining Alice on the album are members of his touring band - longtime Alice drummer Eric Singer, bassist Chuck Garrick, and guitarists Keri Kelli and Jason Hook, with additional contributions from others, including Saber, Hampton, and renowned backing vocalist Bernard Fowler. Slash also lends some guitar style to "Vengeance Is Mine".

'A dark and menacing album for dark and menacing times' is perhaps the most fitting description of Alice's 25th studio album overall, as a chilling conceptual thread runs through the songs, which are told through the voice of a serial killer named Spider - one that Alice describes as "an archnophobic psychopath" (in the song "Catch Me If You Can"). Alice, the master storyteller, weaves a web of danger, intrigue and death that rivals his best work.

Both the CD and inlay state 'For promotional use only. Sale or other transfer is prohibited. Must be returned on demand of record company.'.

Along Came A Spider CD Album

The USA CD version of Along Came A Spider features a jewel case and a beautifully illustrated 22-page booklet containing many additional images over the vinyl release (above) plus track listings, lyrics and credits. This version has the standard 11 studio tracks (i.e. no bonus tracks).

Along Came A Spider CD Album

This limited edition European CD 'Digipak' version of Along Came A Spider again features the standard 11 studio tracks (i.e. no bonus tracks). The booklet is almost identical to the USA version (above) only that the artwork is re-arranged to reflect the slightly different presentation of Digipak and jewel case releases.

This German CD re-issue of Along Came A Spider comes in jewel case and features just a 4-page booklet that is vastly inferior to that provided in the original CD versions (above).

Crucially though, this version features 3 bonus tracks that were initially made available only on iTunes (i.e. Shadow Of Yourself, I'll Still Be There and the 'Acoustic Unplugged' version of Salvation). It is, therefore, a crucial purchase as the first 2 are really good and should probably have made it onto the album in the first place!

These male and female Theatre Of Death 2009 tour shirt was purchased at The Brighton Centre on 05th December.

The front of the male (black) shirt features the artwork from the curtain used at the start of the live shows, with the back listing all the dates from the 2009 world tour between the 17th September and 15th December (this covered the some of the North American and all the European shows that year).

The female (grey) shirt features less gruesome artwork and no tour dates on the back (which is blank).