The first official Alice Cooper tour programme was produced for the Killer tour of 1971/2 (but was also used on the subsequent School's Out tour as well). Three different 20-page versions were produced, which were identical except for the following variations to the back cover:

> The first (rarest) version features an image of a microphone stand surrounded by feathers;

> The second version includes a working single-sided cardboard 'Flexi Disc' featuring the Pretties For You outtake Nobody Likes Me; and

> The third version features a non-working (i.e. printed) copy of the Nobody Likes Me cardboard Flexi Disc*.

*A replica of this version was included in the 2011 Old School Box Set.

This is a great programme, with lots of images of the Alice Cooper Group together with a short biography. My version is the second edition (which is definitely the one to have). This was acquired from Dennis Dunaway's personal collection and is hand-signed by him on the front cover.

The Billion Dollar Babies tour programme was, in keeping with the album of the same name, a lavish affair spread over nearly 60 pages. The material is provided in both black-and-white and colour and includes:

> A host of images of the Alice Cooper Group (but predominantly of Alice);

> A variety of articles on the Alice Cooper Group

> A mail order advert for the legendary 'Whiplash Mascara';

> Examples of fan mail to the Alice Cooper Group; and

Also provided was a pull-out poster of a snake covered in Alice Cooper related markings. Sadly, my copy (like many others) no longer has this, but I have provided an image below for illustration purposes.

The cover artwork is particularly impressive, with an illustration of Alice holding a whip on the front set against a motif of other Alices. On the back is the iconic illustration of the Alice Cooper Group by Charles Lempriere "Prairie" Prince (who latterly became the drummer for the rock band The Tubes) that was used to promote the Billion Dollar Babies Tour.

The programme was subsequently re-issued as a retail magazine titled the 'Dell Special'. My understanding is that it was exactly the same other than a slightly modified front cover (see image below).

This is a must-have item for Alice Cooper Group fans, despite the premium prices commanded for what is now a fairly rare item.

Welcome To My Nightmare Tour Programme

This 26-page programme was used for the Welcome To My Nightmare tour of 1975. The material is provided in both black-and-white and colour and includes:

> A host of images of Alice (predominantly performing live) plus a few featuring the Alice Cooper Group from the Billion Dollar Babies tour;

> A background on the Welcome To My Nightmare project;

> A biography of Alice's touring band and key staff;

> A pull-out poster of Alice in a coffin; and

> Promotional material for the Welcome To My Nighmare album.

An alternative, smaller, version with slightly different content was produced for the Australian and New Zealand legs of the same tour.

This 28-page programme was used for the King Of The Silver Screen (i.e. Lace And Whiskey) tour of 1977. The material is provided in both black-and-white and colour and consists almost entirely of images of Alice (both in and outside of concert). Also provided is an 'often-asked questions' feature plus tour credits and an invitation join the 'Alice Cooper Fan Club'.

An almost identical programme was used for the 'School's Out For Summer' tour of 1978, with the only difference being a slightly edited credits section.

This 28-page programme was used for the Madhouse Rock (i.e. From The Inside) tour of 1979. Although presented with a new cover, the material provided is very similar to the King Of The Silver Screen programme (above), with a number of the images re-used (ableit in a reconfigured manner). Also, the credits section is almost identical only with updated personnel information provided.

New material is also present though, including some updated photos, promotional artwork for the Madhouse Rock tour and a print of the infamous 'Certificate Of Insanity' (which featured in the press packs for the album).

This revised 28-page programme was also used for the Madhouse Rock tour of 1979. This is better than the original version (above), as it is both full colour and features all-new images of Alice performing during early dates of the Madhouse Rock tour. It is understood that this became the primary programme for this tour, with the original version being the rarer of the two.

This 24-page programme features extra-large pages, numerous glossy photos of an off-stage Alice plus tour credits. It is understood to have been sold at both the Flush The Fashion (1980) and Special Forces tours (1981-1982), with the only difference being a slightly edited credits section.

This 24-page programme features numerous glossy photos from The Nightmare Returns tour plus a biography on Alice Cooper (by an unnamed source) spread over four pages. Also provided are tour credits plus an advert for the Constrictor album.

This 24-page programme features numerous glossy photos from the Raise Your Fist And Yell tour plus a biography on Alice Cooper (by an unnamed source) spread over four pages.

Also provided are tour credits, a short biography on Kane Roberts (Alice's lead guitarist on the tour), a list of Alice's top 10 horror films plus adverts for the Raise Your Fist And Yell album and Kane Roberts' debut solo album.

This 24-page programme features numerous glossy photos from Trashes The World tour plus a biography on Alice Cooper (by an unnamed source) spread over six pages. Also provided are tour credits, promotional photos, plus an advert for the Trash album.

This is a copy of a 25-page 'Contract Rider' for the Sweden (Stockholm and Gothenburg) leg of the 1989 Trashes The World tour. A rider is a document where the artist's requirements are formally disclosed to the management of the venues where they will be performing.

Included in this document, amongst other things, are details on the requirements for the dressing rooms, lighting and power, tickets, crew food and security. There is also an itinerary for Alice's stay in Sweden (complete with hotel names and flight numbers) plus a response from the venue management to the demands of 'Alice Cooper'.

This 24-page programme features numerous glossy photos from the Hey Stoopid Tour plus a one-page background on the Hey Stoopid album (by an unnamed source). Also provided are tour credits, promotional photos, plus adverts for the Prime Cuts video and Love's A Loaded Gun single.

This is a copy of a 25-page 'Contract Rider' for the European leg of the 1991 Hey Stoopid tour, with the content very similar to the Trashes The World tour rider (above). There is no itinerary included, however.

This 16-page programme is believed to have been produced during the second year of the Descent Into Dragontown tour (2002) but was actually purchased (for £10) in 2004 during The Eyes Of Alice Cooper tour at London Hammersmith Apollo (presumably they had some left over).

The book features lots of images of Alice on tour, the majority of which are from the Descent Into Dragontown tour, but there are also some pictures from older tours as well.

There is little on offer in the way of text other than a short introduction from Alice, which quotes the lyrics to the song Dragontown, tour credits and an advert for some of his CDs releases.

As you will see from the first image, the front cover is hand signed by Alice in silver pen making this a nice collectable item. Also, on the back you will note that the ink from another signed copy has made its way to mine so two autographs for the price of one (sort of)!

This is my laminate from the 2005 Dirty Diamonds tour Meet and Greet event at Bournemouth International Centre. It was signed by Alice during the 30 minutes or so that my group had with him. My fondest memory from this experience was that one of the ladies present was also called Alice.  When he found out he replied, "silly name for a girl"!

This is a 'File Copy' of the contract for Alice's 'Psycho-Drama' tour performance at the Majestic Theatre in Dallas on the 23rd October 2007.

This nice 'Postergramme' was purchased at The Brighton Centre show in December 2009 and includes lots of photos from some of the shows, tour credits and a nice 'Introduction To The Theatre Of Death' by Alice, which provides some fascinating insights into how the tour came to be.

Also provided are some brief notes on the origins of Alice's use of the electric chair, guillotine, gallows and killer mic stand together with the setlist from the 2009 Theatre Of Death tour. It also unfolds to provide an excellent (and huge) poster of Alice performing the show opener, School's Out.

This is a used satin 'VIP' pass from the second of two Theatre Of Death tour Halloween Special shows at the London Roundhouse in November 2010. 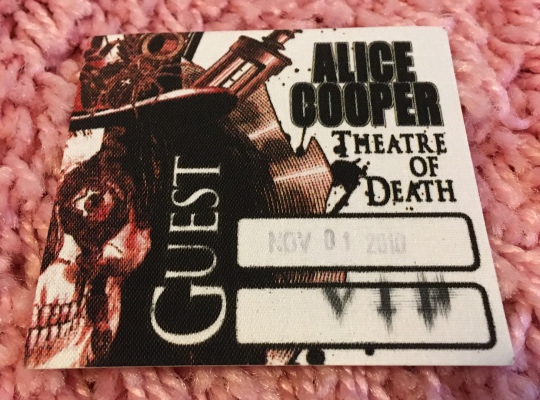 This 43-page document was produced for members of 'Alice Cooper' who worked on the 2009 Theatre Of Death tour of Europe (including Halloween shows at the London Roundhouse, as indicated on the front cover).

It includes a detailed itinerary of all the shows (including show dates and details of hotels and flights), days off, journey times between venues, venue capacities and even currency exchange rates and time zones. There are also instructions provided to all staff regarding claiming expenses and a warning not to "hog" the internet bandwidth!

The itinerary is very interesting as it shows where everyone headed after the final show in Lisbon on 29th November. Alice, for instance, went back to London Heathrow and then had to wait 5 hours before boarding a flight home to Phoenix. 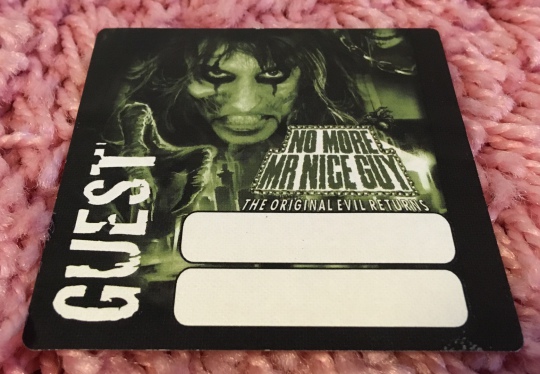 This is a used Live Nation satin 'Staff' pass from the No More Mr Nice Guy tour at London Alexandra Palace on 29th October 2011. 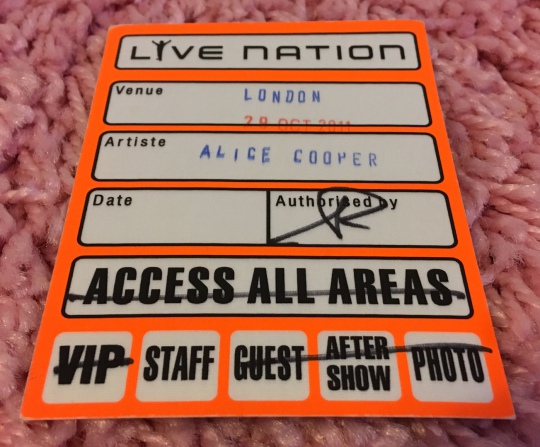 This is a used satin 'Working' pass from the Halloween No More Mr Nice Guy tour show at the Glasgow Clyde Auditorium on 31st October 2011. 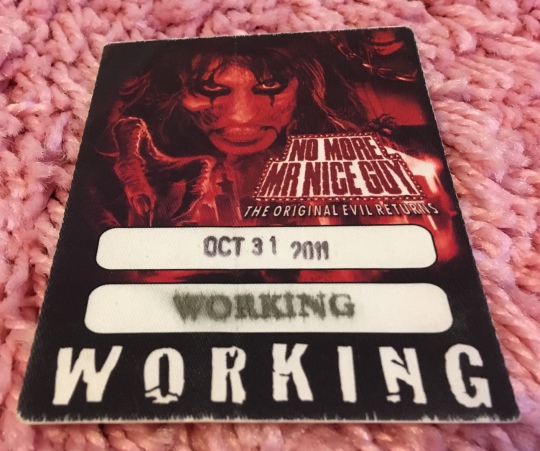 This guitar pick set was only available for purchase at the No More Mr Nice Guy tour shows of 2011 and features 6 Alice-related picks in a metal tin.

This note is handwritten, signed by Alice himself and is believed to have been penned as part of the promotion for the 2011 or 2012 UK Halloween shows. I've not seen this text printed though so if you've seen it anywhere then please let me know.

It contains obvious references to the dialogue from Bram Stoker's Dracula novel, parts of which were then used in Sir Christopher Lee's spoken introduction to the Hollywood Vampires' debut album of 2015. 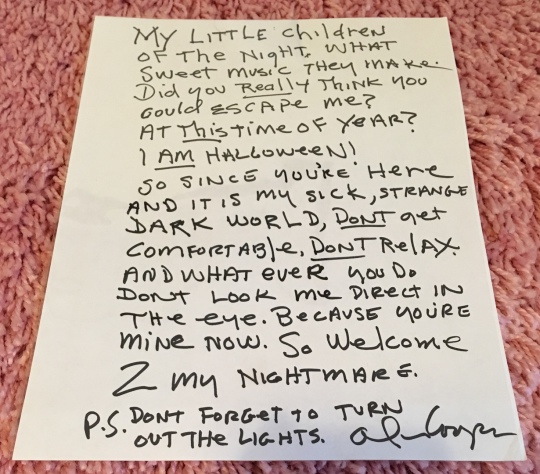 This is a laminated VIP Meet and Greet pass from the Raise The Dead tour. 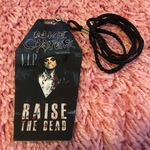 This nice 'Postergramme' provides all the dates and venues of the 2012 and 2013 Raise The Dead tours and lots of photos from some of the shows, tour credits and images of hand-drawn sketches of fallen stars (presumably by Alice). It also unfolds to provide an excellent (and huge) poster of Alice performing the show opener, Hello Hooray.

On the back is a cool half-Alice-half-skull drawing (which I've not seen used anywhere before) together with the predominant setlist from the Raise The Dead Tour (there were some variations during this period though).

This is a used satin 'Working' pass from the Spend The Night With Alice Cooper tour show at the Lynn Memorial Auditorium, Massachusetts, USA on 14th May 2016. 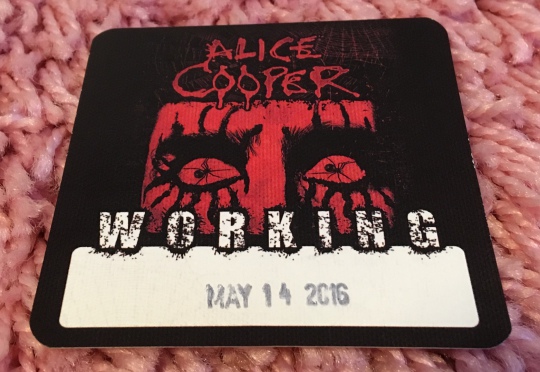 This is a used satin 'VIP' pass from the Ol' Black Eyes Is Back tour show at The Brighton Centre, England on 08th October 2019. Also pictured is a 'Billion Dollar' card, which provides instructions for VIP holders on how to download their photos with Alice and co.

This is a used satin 'Band Guest' pass from the Ol' Black Eyes Is Back tour show at the 02 Arena, London, England on 10th October 2019. 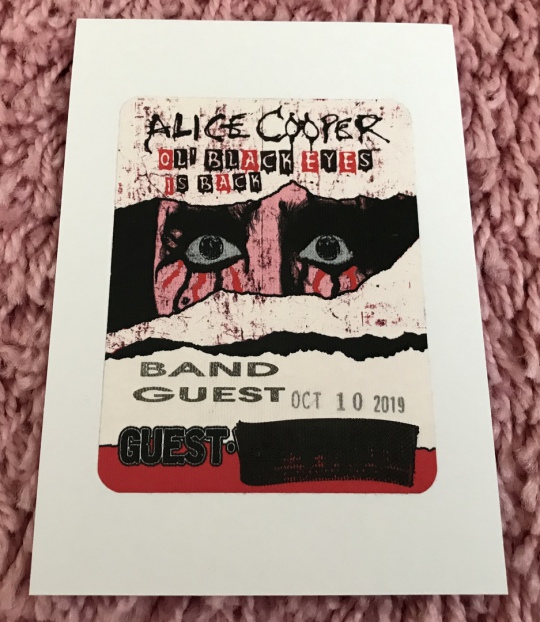 These are tickets from some (but not all) the concerts featuring Alice Cooper that I have attended over the last 20 years or so.