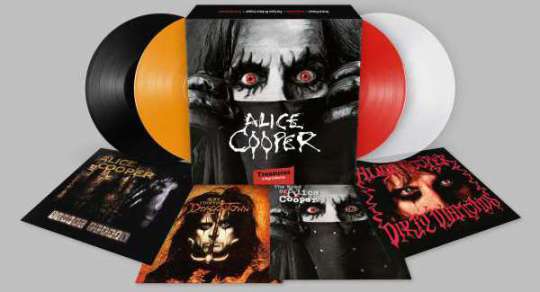 This European vinyl box set features 180 gram copies of Alice's first four 21st century (i.e. Brutal Planet, Dragontown, The Eyes Of Alice Cooper and Dirty Diamonds) in gatefold sleeves and different coloured discs. Packaged in a sturdy box featuring artwork from The Eyes Of Alice Cooper on the front, it was limited to 550 hand-numbered copies (of which mine is #496).

Brutal Planet is provided on black vinyl and is the only album that is individually sealed. The reason for this is that is likely to have been a re-run of the initially limited 2018 release by Ear Music (ref: 0212924EMX) as it is almost exactly the same. This version, however, does not come with the bonus CD, features a different 'Virgin Vinyl' hype sticker on the front and no limited number on the back (a different barcode is also provided).

The other 3 albums are exclusive in design to this set, but with all featuring artwork from the original releases on both the gatefold and inner sleeves. Dragontown comes on translucent orange vinyl, The Eyes Of Alice Cooper on translucent red vinyl and Dirty Diamonds on translucent clear vinyl. The track listings are the same as the original albums with the exception of Dragontown, which somewhat randomly, includes the former Brutal Planet CD bonus track Can't Sleep, Clowns Will Eat Me (ref: 8573839032) for the first time on vinyl. The commonly found 'bonus track' Stand is naturally also included on Dirty Diamonds (it's a shame they didn't include the superior bonus track The Sharpest Pain instead).

All-in-all this is a nice set, but all 4 albums have been released on vinyl numerous times before. With an initial retail price of over £80, it didn't really offer particularly good value-for-money either (although it quickly dropped down to a more reasonable £60 shortly after its release). With this in mind, this set is for hardcore fans only as it offers little of significance.

NOTE: The versions of Dragontown, The Eyes Of Alice Cooper and Dirty Diamonds from this set were re-released separately in September 2020. They were exactly the same as the copies here only that they all featured black vinyl discs and the 'Virgin Vinyl' hype stickers as provided on the copy of Brutal Planet in this set. These re-issued versions are featured in the corresponding album pages of this website.