This sealed USA cloth patch features an image of the Alice Cooper Group holding machine guns(!) from the Billion Dollar Babies album promotional photo shoot. On the back are instructions for either ironing or sewing the patch on to your favourite piece of clothing.

This fantastic and rare item was acquired from Dennis Dunaway's personal collection and is in brand new / sealed condition. It's surely worth more than the original $1 price tag advertised on the packaging.

This excellent metal pin badge features a half Alice, half skull, image with a dagger going through above the right eye and is very similar to some of the artwork that supported the Raise Your Fist And Yell Album. At the base of the badge is Alice's name.

The magnets are as follows (see images below for more details):

2. Welcome To My Nightmare cover image;

3. Certificate Of Insanity (from the From The Inside era);

4. Alice performing live (from the Constrictor era); and

This was part of a series, with other releases including Elvis Presley, James Bond and Scooby Doo!

This nice pin badge was sold on the Alice Cooper UK store and features Alice wearing a Welcome 2 My Nightmare style top hat. The production quantity is unknown but was probably quite small as they sold out quickly.

A further 150 were released in 2017 and that version featured a stamp on the back stating which one the buyer received.

This nice enamel pin badge was sold on the official Alice Cooper US online store and was limited to just 150 pieces. It was released in 2016 to mark the 30th anniversary of the Constrictor album and faithfully recreates the front cover with Alice's head wrapped with a Boa Constrictor snake.

Following the release of the Constrictor 30th Anniversary enamel pin badge (above) in 2016, Raise Your Fist And Yell received similar treatment 2 years later. This again faithfully recreated the front cover of the album with Alice's face embedded on a fist being raised into the air. Unlike the Constrictor badge, it was not indicated if this badge was limited edition.

This cool official pin badge was sold on the official Alice Cooper online store, is modelled on Alice's famous guillotine, and features a working 'blade' complete with blood splatter at the base.

It goes particularly well with my custom Alice Lego figure! 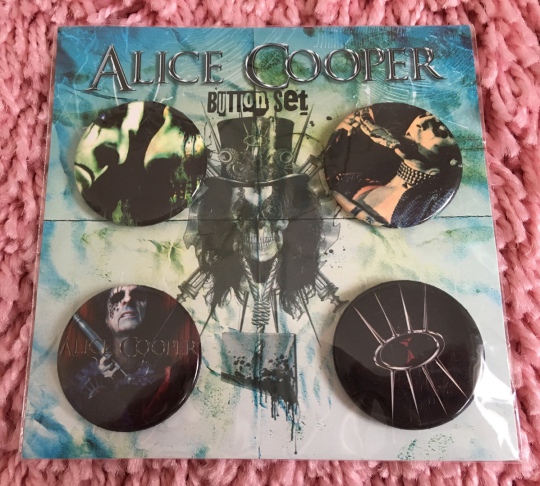 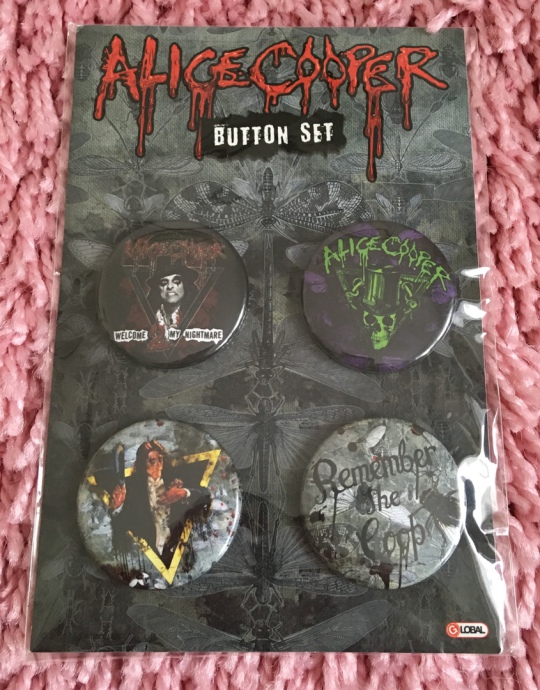 This UK-produced plastic keyring is one of the earlier pieces of Alice Cooper merchandise and features an image of Alice only on the front live in concert. An alternatively packaged version was also produced (see image below) but it's probably not quite as sought after as a seller on eBay believes! Also produced, were similarly designed badges and stickers (see images below).

This simple plastic keyring was sold at merchandise stalls during the 2005 and 2006 UK Dirty Diamonds tour.

This simple plastic keyring was sold at merchandise stalls during the 2008 UK Psycho-Drama tour.

This nice medallion is a replica of the extremely rare gold coloured item from 1973 that was handed out to members of the Alice Cooper 'family' (e.g. the band, crew members and promoters etc). It is thought that only about 50 were originally made.

The silver replicas were sold for a short period (about 2 weeks) in 2011 and have themselves become quite sought after.

This bronze medallion was purchased from the Alice Cooper Solid Rock website, which provides the following description:

These recently released Limited Edition Fan Medallions feature an image of Alice (makeup and all!), framed by his signature Boa on the front, and a color Solid Rock logo on the back.

Each large (1-9/16”) Antique Bronze Medallion is struck to the same exacting standards used to produce Military “Challenge” Medallions. In addition, each Medallion is color epoxy filled and stamped with a unique “Public Animal” serial number which will be registered directly to you as the purchaser.

For Fans of Alice wishing to directly support his Solid Rock Teen Center, the purchase of these quality Medallion coins is a “KILLER” way to participate! Watch for additional Solid Rock Medallions coming soon! Each medallion is a limited edition production which is sure to become a collector’s item.

My medallion is #G05801 and nice thank you card. Let's hope for more medallions in the future as indicated on the website! 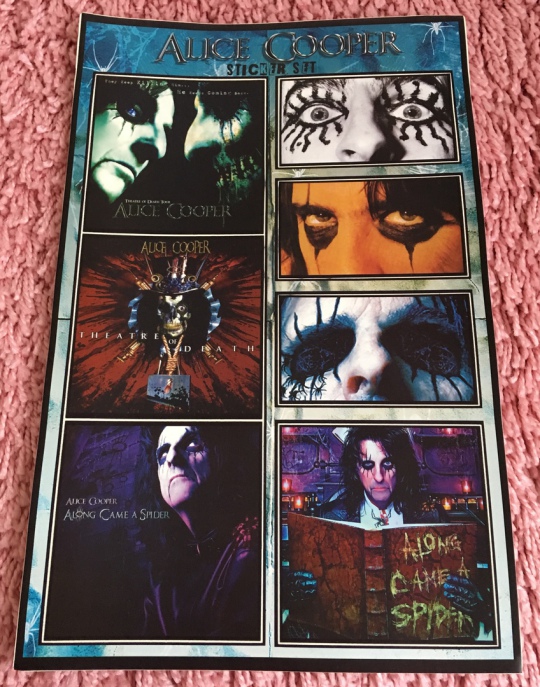 Along Came A Sider / Theatre Of Death Era Stickers (2009) 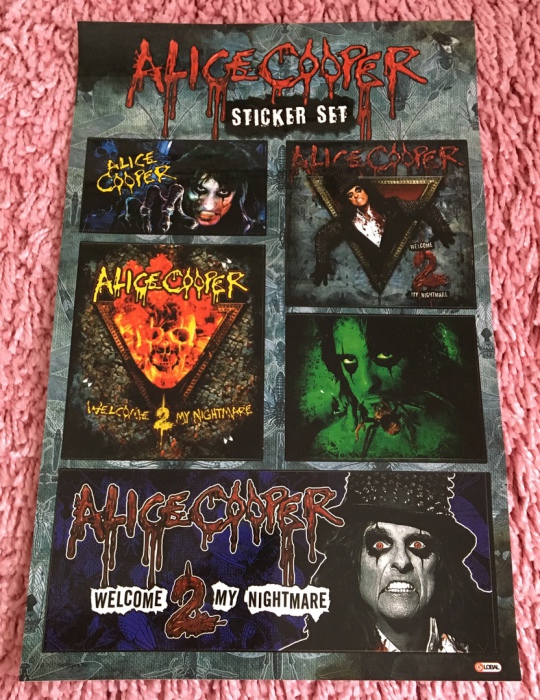 This pack was launched to support Alice's campaign for the US Presidency in 2016 and features a badge, bumper sticker, poster and Billion Dollar Bill (which presumably is for bribing corrupt officials). Sadly, Alice didn't make it the White House!