The lavish Old School Box Set was released in 2011 and contains a host of rare and never-before-released material from the Alice Cooper Group vault. It was aimed at diehard fans with a price tag to fit the bill (about £200), but a cheaper 'Special Edition' version was released a year later (see below).

Originally limited to 5,500 units individually numbered copies (of which mine is #0,863), a further 4,500 are understood to have been produced due to high demand. Additionally, 5 lucky owners of the initial production run found Willy Wonka style Golden Tickets inside (see image below), which treated them to a meet-and-greet with Alice and a gift bag. 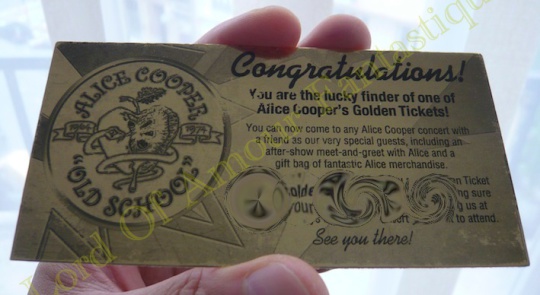 A Golden Ticket (not mine)

It’s hard not to admire the desk case, which is inspired by the original deluxe School's Out album sleeve of 1972 (the common denominator being designer Ernie Cefalu). This is a lavish production and is certainly in keeping with the price of the box set. As with a traditional desk, it can be kept in an upright position, allowing you to view the contents.

My only gripes are that (a) the size and shape of this piece means that it isn’t easy to store safely and (b) the unique number is printed on the back, but it would have been great if this could have been a metallic plaque. Still, neither of these are major complaints and this is definitely a piece that is meant to be displayed rather than stored away.

In Their Own Words CD

This disc contains 70 minutes of interview material as follows:

1. An interview from the early 1970's, with Alice and Neal Smith present (but with Alice doing almost all the talking), where they speak about:

> The rock scene at the time;

> The themes of sex, death and money;

> Clearing customs whilst on tour.

2. An interview from December 2010 (at Cooperstown, Phoenix), with Alice, Dennis Dunaway, Mike Bruce and Neal Smith (but again with Alice doing most of the talking), where they speak about:

> Glen and Mike joining the band;

> Changing from The Earwigs, to The Spiders, and then The Nazz;

> The image of the band;

> Recording Pretties For You.

3. An interview from Spring 2011 (during the recording of the Welcome 2 My Nightmare album), with Alice and Bob Ezrin, where they speak about:

> Recording Love It To Death;

> The impact of Love It To Death;

> Use of guest musicians;

> The Muscle Of Love packaging; and

This two-hour DVD is comprised of abridged content from the latter two interviews provided on the In Their Own Words CD (above) but with extra video / music segments and graphical interludes. There is, however, also additional material that did not feature on the CD (i.e. you need to listen to / watch both to hear everything), which includes:

1. From the interview with Alice, Dennis, Mike and Neal:

> The chicken incident at Toronto Rock N Roll festival in 1969;

2. A further interview (also at Cooperstown, Phoenix in 2010), with Dennis, Mike and Neal, which took place after Alice had left:

> The chicken incident at the Toronto Rock N Roll Festival in 1969;

3. From the interview with Alice and Bob Ezrin:

> The success of I’m Eighteen;

> Introducing the Gallows to the live shows;

> The impact of School’s Out;

> The demise of Glen Buxton; and

Also provided is an 'Introduction' by Bob Ezrin (which actually plays at the end) where he speaks about the following:

> The reason why the box set was produced;

> The efforts taken to produce the box set;

> Issues experienced during the recording of the interviews;

> The role of Cindy Smith Dunaway in the history of Alice Cooper; and

> The design of the box.

As eluded above, it is obvious that there were technical / time issues during the production of the DVD. Whilst the (at times) poor quality camerawork and sound can be forgiven, it is highly unfortunate to say the least that the subject of the break-up was covered at a later stage by just Alice and Bob Ezrin. This has, understandably, drawn criticism from some fans, who have claimed that this was merely used as an excuse to avoid certain individuals having to deal with this sensitive subject in the presence of others. This is not correct though as there is understood to be a genuine reason for the original interview ending early (i.e. Alice had to leave to prepare for his annual Christmas Pudding show). Also, the subject of the break-up is often one of the last things to come up in interviews due to chronological reasons, so it isn't a surprise that this was the area to suffer as a result of the time constraints. That said, it's not unreasonable to question why Dennis, Mike and Neal were not asked to cover this instead of Alice and Bob.

These CD's feature a range of rare and previously unheard demos, rehearsals, live performances and advertisements (all of varying quality) covering the period from The Spiders through to Greatest Hits.

The full contents of the CDs are as follows:

Oddly, the sleeve of the first CD has no title printed on it, whereas the second CD states ‘TREASURES TWO’.

The material on these CDs ranges from obscure, to fascinating, to essential and is of great appeal to hardcore Alice Cooper Group fans, whereas more casual followers will probably not be as interested. A good analogy is that this is similar to the type of bonus content you might find on a movie DVD.

On reflection, this is probably the jewel in the Old School crown. What we have here is an excellent bootleg recording of the Alice Cooper Group at the height of their creative and energetic powers.

The sound quality of this nine-track* set is remarkably crisp and I would go as far as to say that this is probably the best live material available from the Love It To Death (i.e. I'm Eighteen, Is It My Body and Long Way To Go) and Killer (i.e. all tracks except Under My Wheels and Desperado) eras.

* The vinyl version does not contain the Under My Wheels encore.

The Nazz, Wonder Who's Loving Her Now? 7" Vinyl Single

This is a reproduction of the 1967 7" single by The Nazz (which is almost impossible to find these days) and is therefore a great addition to the set.

Whilst the disc is made of nice heavyweight vinyl, the package is let down a little by the fact that the labels are a notably duller shade of blue than the original version. This is a shame as the other two pre-Alice Cooper singles (by The Spiders) have both been faithfully replicated to the point where it is very hard to tell them apart without inspecting them carefully.

All the above content is nicely summarised with a track list card, which provides the following useful information:

Contained within the folder, we have a great reproduction of the Killer tour programme complete with a non-working (i.e. printed) copy of the Nobody Likes Me cardboard 'Flexi Disc'. Also included is a replica ticket stub from 'The Alice Cooper Show' at Wembley Arena in 1972 (entry just £1!), a copy of the setlist and 5 pieces of Alice Cooper Group era artwork printed on A4 card.

This marvellous 60-page hardback book nicely re-creates the feel of a real high school yearbook and contains a detailed biography of the Alice Cooper Group (amusingly divided into the sub-sections 'Freshman', 'Sophomore', 'Junior' and 'Senior') by music journalist Lonn Friend together with stacks of archive photos and images.

This is a dream come true for Alice Cooper Group fans and, in this respect, is a priceless collection of material. I paid £160.00 for the set in 2011, which is pretty reasonable based on what is provided (and will surely only go up in value in the future).

Some have commented that the set lacks the original recordings of the Alice Cooper Group's best songs, but surely everyone has these already. I guess the set would have seemed more complete with this, but it's completely understandable why the decision was taken not to include them.

Something signed by the surviving Alice Cooper Group would have been really good, but I understand that with 5,500 copies initially produced, it would have been a very tall order.

So, is it worth investing in? Yes, of course it is and a huge well done to everyone involved in making this a reality. I can only hope that a further set of similar epic proportions will be released one day covering the solo years.

Finally, my set clearly had a fault as there was no Golden Ticket inside!

This 'Special Edition' of the Old School Box Set was released in Autumn 2012 at the bargain price of about £30. For your money you got Treasures CDs 1 and 2, the In Their Own Words audio CD and the CD of the St. Louis Concert CD. Embedded in the 'Media Book' style design is a physically smaller version of the Yearbook, but which retains the full content of the original version. This isn't ideal though as it's quite cumbersome to read due to the thickness of the Media Book and the binding of the pages.

Gripes aside, this offers exceptional value for money, so if you couldn't stretch to the full set then there's no excuse not to take a punt now.

This fantastic cake was a present from my wife for my birthday and was made by a very talented local cake maker. Her work was given the thumbs up by the one-and-only Ernie Cefalu, who designed the original artwork!