This rather cool metal lunch box features the image of Alice's eyes off From The Inside. The eyes are slightly elevated from the rest of the box which is a nice feature. The sides of the box feature later images of Alice in concert.

This official 2010 Alice Cooper calendar features a range of images from across Alice's career. As with the 2004 calendar (above), the majority are from live performances. Also included, however, is a reproduction of the 'Certificate Of Insanity' from the From The Inside era and artwork from the Along Came A Spider album.

To the best of my knowledge, no other multi-page official calendars have been produced other than this and the 2004 edition.

These hard-to-find storage cases are designed to hold the Japanese Mini LPs from Pretties For You through to From The Inside (the first 6 going in the Billion Dollar Babies case and the other 6 in the Welcome To My Nightmare case). Like the respective Mini LPs themselves, the cases mimic the original vinyl release covers front and back meaning that the Welcome To My Nightmare case has the tracks listed whereas Billion Dollar Babies is just the blank snakeskin effect.

These cases are the perfect way to round off the Mini LP collection with the CDs safely / snuggly fitting inside and within easy access. Fingers cross that the latter Alice Cooper albums get the same treatment!

These cool custom micro LPs are smaller than a guitar pick and endeavour to faithfully replicate the sleeves of the original UK records. They even feature mini card discs with accurate vinyl labels!

They have since been joined by a bespoke set of Live From The Astroturf mini 7" singles!

These great signed drumsticks celebrate the 2011 induction of the Alice Cooper Group into the Rock And Roll Hall Of Fame and are each hand-signed by Neal Smith (the Platinum God) himself.

These novelty glasses were, I believe, a novelty item handed out to attendees at Alice's Cooperstown bar in Phoenix when he received the 2012 Heritage Award from the Arizona Chamber of Commerce and Industry. They are made of plastic, have Alice's famous snake eyes printed on the lenses and come complete with a Heritage Awards tag.

This metal money clip, complete with 5 Billion Dollar Bills, was sold on the official Alice Cooper website store in 2013.  The bills are different to those dished out by Alice at his concerts and feature an image of him from the Welcome 2 My Nightmare era.

This interesting item is from Alice's now closed 'Cooper'stown' restaurant in Phoenix. It features a cool snakeskin design and the Cooper'stown logo, complete with Alice using a guitar as a bat, on either side. I added a clear display case for it and it now sites alongside some other baseballs that I've purchased whilst out in the USA to catch a game.

Although I don't have a precise date for when this item was released, I have seen a signed version from 2000, which indicates that they were offered around the time that Cooper'stown Phoenix opened its doors (in 1999).

This Alice Cooper Top Trumps card was included (along with several other artists) in copies of the UK Kerrang! music magazine in 2014. As with all Top Trumps cards, various characteristics of the subject matter are scored with Alice ranked on 'Influence', 'Charisma', 'Longevity' and 'Icon Rating'.  I'm not sure what each ranking is scored out of, but he appears to have done quite well (and so he should)!

This gruesome looking mask is produced by Trick Or Treat Studios and is officially licensed by Alice Cooper. It is made of rubber with authentic looking hair attached, there are also holes above the eyes so you can see where you're going when wearing it.

Some fans have stated that it doesn't look very much like Alice, but I think it's ok. It's certainly very scary, this is something numerous children who have come around my house trick-or-treating will testify to!

Alice Cooper and Dennis Dunaway had always been big admirers of revered surrealist painter Salvador Dali. Conversely, Dali was also a fan of the Alice Cooper Group and a friendship (particularly with Alice) was to develop based on mutual appreciation for one another's art.

In 1973 Dali invited Alice to be the subject of the world's first ever '3D Hologram'. Typically for Dali, this was not something mundane with Alice furnished in lavish jewellery accompanied by an external brain comprising a chocolate eclair and ants!

This brilliant crystal by the Dali Museum replicates the hologram in excellent detail. It also features a strong light at the base which brightly illuminates it.

These amusing 'Asphyxiated Alice' and 'Choking Cooper' trading cards are part of the 2017 'Hard Rock' Garbage Pail Kids series, and both feature a character in trademark make-up being strangled by a snake.

For those not in the know, Garbage Pail Kids (a parody of the then popular girl's Cabbage Patch Kids doll line) were very big amongst school kids like me in the 80's, with packs purchased from corner stores that came with a stick of gum. Much like Alice's music, parents weren't particularly happy about them as they often featured rather gruesome characters.

This print features the Alice Half Skull design by artist Airic Brumitt which, most famously, featured on the T-shirt worn by Alice on the cover of the Trash album. However, it originally featured on the insert of the Raise Your Fist And Yell album and on an official patch (see images below). It is personalised and signed by the artist. 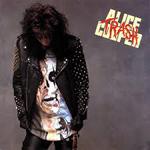 Arizona Lottery, in partnership with Alice's Solid Rock Foundation, launched this cool range of $5 scratch cards for a short period of time during the fall of 2018. Only available within Arizona state, 3 variants were produced, with different images of Alice and scratching motifs on the front. Each featured exactly the same game and a chance to win up to $50,000 if your numbers matched any of the 'Winning Numbers' at the top of the card (if you were a winner, you then won the prize stated beneath your Winning Number).

Non-winning participants could also enter a '2nd Chance' competition, by entering their unique code onto either the Arizona Lottery website or App. The prize was VIP tickets to Alice Cooper's Annual Christmas Pudding Concert in December 2018 and Alice Cooper merchandise. Presumably, some of the proceeds from each sale went to the Solid Rock Foundation (although this isn't stated on the scratch cards).

Due to the limited production and geographic availability of these scratch cards, obtaining them was quite difficult. Some hardcore fans managed to get 'Voided' cards for free from Arizona Lottery, but only a handful were produced. Thankfully, I managed to obtain an expired / unscratched set on eBay a year after release for a reasonable price.

Those who couldn't secure the actual scratch cards were given an alternative opportunity to purchase one of 500 signed motif posters (see image below) from the Solid Rock Foundation shop for the rather hefty sum of $100. Still, I guess it was all for a good cause though, so not so bad.

Following hot on the heels of the lottery scratch cards (above), Alice's Solid Rock Foundation also teamed up with Arizona's Danzeisen Dairy in the fall of 2020 to offer fans an exclusive Alice Cooper milk bottle. Lucky residents of Phoenix / Arizona state area were able to buy these from their local stores filled with various flavoured milk for just $6.

Alice fans were given a limited chance to purchase an empty bottle for $19.99, with $10 from each sale being donated to Solid Rock. Unfortunately, the automatically generated international shipping prices were absolutely crazy with the UK quote being over $130! Luckily for me though, I was one of the first people to order (I was order #7) and somehow managed to get it without having to pay for the shipping at all (see below)! Despite this, I still had to pay £20 of import duty so it ended up costing over £35!

A slightly different design, featuring an alternative image of Alice, was introduced in 2021 (see image below).

This face mask was sold on his official online store during the Coronavirus pandemic of 2020/21 (when most people had to wear one in public spaces). 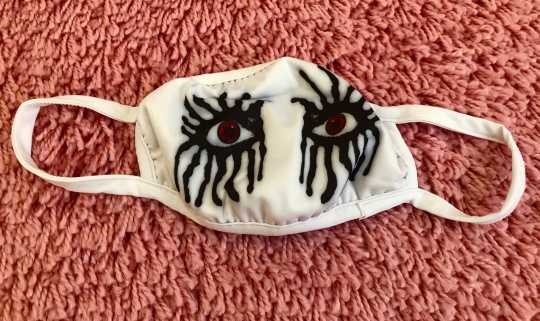 This official Alice Cooper branded coffee was produced by Catfight Coffee in the USA. Available as either whole beans or ground, its packaging included Welcome To My Nightmare inspired artwork and the following promotional text:

'Caffeine! Caffeine! Amphetamine A little speed is all I need!'  Alice Cooper

We picked ‘Ole’ Black Eyes’ to represent Catfight Coffee’s very first coffee from Africa. This huge Burundi AA coffee bean comes from the Burundi High Mountains at Coffee Society (BUMOCO). It's crisp and tart with a full body and notes of Red Apple and Black Tea with a quick finish. When people talk about boutique specialty coffee, this is exactly the kind of coffee they are talking about.

For super-keen fans, a special bundle was also produced for $59.99, which included a bag of coffee, a T-shirt and enamel pin (see image below). I only went for the beans due to excessive shipping costs to the UK but it was really cool to get some nice bonus items, which are pictured below! 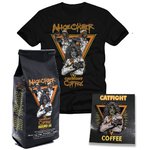