Brutal Planet was not subject to a vinyl release when it first launched in 2000 as the format had near-enough died out by that stage. It wasn't until 2011 (around the time of its revival) that Night Of The Vinyl Dead addressed this with this European limited-to-500-copies edition.

This release comes in a bespoke cardboard straight-jacket outer case, with arms that wrap around the back and slot into two grooves at the front. A small hole at the back peers through to the album and enables you to see which hand-numbered copy you have (this one being #102).

As with the original CD release (below), the front cover features an image of Alice with half of his face hidden by a shadow. Under his right eye are some mysterious symbols and behind him is an industrial-looking backdrop with creepy embedded faces and eyes!

If you manage to free yourself from the jacket then inside is a nice traditional gatefold sleeve album featuring the original Brutal Planet artwork. The vinyl itself is black with the same image of Alice reflected on either side. Also included is a nice booklet which includes more of the original artwork plus track listings, lyrics and credits.

To date, this is easily the best version of this album on vinyl. The only thing to note is that the outer case is quite delicate and fiddly so could probably be easily damaged if mis-handled. For this reason (and the fact that it's quite rare) this version is best-suited for collectors only.

After waiting over 10 years for a vinyl version of Brutal Planet, the Night Of The Vinyl Dead version (above) was closely followed by this European 180 gram offering from Back On Black. There was no fancy cover this time but it was a good opportunity for those that missed out on that release to get hold of a copy at the second attempt (this version was also cheaper).

Initially available on limited edition translucent yellow vinyl (like this one), and then on black vinyl, this version again features a nice gatefold design. There is no booklet though so the track listings, lyrics and credits now appear on the inside of the sleeve.

This further 180 gram European pressing of Brutal Planet by Cargo Records features a simple (and very shiny) card sleeve with an opaque purple disc housed in a seperate inner sleeve including original artwork, track listings and credits. This version is understood to be limited to 500 copies, but is not numbered.

This further 180 gram European pressing of Brutal Planet by Cargo Records is exactly the same as the above version (including the product code) only that disc is now a partially translucent gold marble effect colour. Again, this version is understood to be limited to 500 copies, but is not numbered.

This further 180 gram European pressing of Brutal Planet by Cargo Records is exactly the same as the above versions (including the product code) only that disc is now translucent turquoise in colour. Again, this version is understood to be limited to 500 copies, but is not numbered.

This further European 180 gram vinyl re-issue of Brutal Planet by Ear Music features a black vinyl disc and is notable because it also comes with a CD copy of the album in a simple card sleeve.

Also included is a nice gatefold sleeve featuring artwork from the original CD release booklet (see above). A double-sided paper inlay includes further original artwork and track listings and lyrics. Additional artwork and credits are provided on the innner sleeve.

Brutal Planet was subject to a release on cassette in Eastern Europe only. This version comes from Russia and includes the standard 11 tracks found on the original version of the album. The J-card contains abridged artwork.

This European 'Promotional Sampler' CD comes in a slimline jewel case and features Blow Me A Kiss, Brutal Planet and Take It Like A Woman (all from the Brutal Planet album). The front cover is similar to the main album but doesn't include the background artwork behind Alice's face.

This USA promotional CD comes in a simple card sleeve, features a purple CD, and contains all 11 tracks from the official album. Notably though, the order of the tracks is different to the final version with all the tracks after the opener (Brutal Planet) shifted around.

This European promotional CD is less professional looking than the USA version (above), with a crude paper sleeve contained in a slimline jewel case and blue CD-R. The track listings are again in the same mixed form.

This 'Limited European Edition' CD version of Brutal Planet came out upon the albums immediate UK release in 2000. It comes in a card slipcase and features a fold-out poster of Alice above a building topped off with a 'Brutal Planet' sign (which also featured on the Gimme CD single cover, below).

Also included in the jewel case is a booklet featuring lyrics, track listings, credits and some more images of Alice.

This was the first time that multimedia content had been provided for an Alice release, with PC users treated to a screensaver featuring 3 Brutal Planet themed images (all from the artwork contained in this release).

I really liked this album when it came out so the original copy is well used (as you'll see from the images below). I therefore purchased another sealed copy of this classic release for future use.

This 'Exclusive Australasian Edition' of Brutal Planet is notable due the inclusion of the previously unreleased bonus track Can't Sleep, Clowns Will Eat Me. This track has a brief mention in the booklet but, other than that, it is almost identical to the UK version (above), minus the additional goodies.

This 'Limited European Tour Edition' CD version of Brutal Planet was released in the UK in the summer of 2001 and features a striking blue slipcase. There does not appear to be any information available on how 'limited' this release was, but my 3 copies (one used and two sealed) are numbers 09585, 00945 and 00005 respectively (the latter previously belonging to someone involved in the production of the album).

Unlike the original UK release (above), this version comes with 2 CD's. The first includes the standard Brutal Planet album whereas the 2nd disc features 4 live tracks (It's The Little Things, Wicked Young Man, Poison and My Generation) taken from the Brutally Live concert DVD. Also included on disc 2 is a low budget video of It's The Little Things (set against footage from Brutally Live) and a decent 35 minute 'Total Rock Rockumentary', which includes a mixture of interviews with Alice and snippets from musical influences and his own material. Amongst the topics discussed are:

> His upbringing in Detroit;

> His Dad's career as a car salesman;

> The influence of The Beatles and The Rolling Stones;

> How he runs new music by his sister due to the honesty of her responses;

> His time with The Earwigs and The Spiders;

> The influence of Frank Zappa;

> The origins of the name Alice Cooper and his adoption of it;

> The influence of Bob Ezrin;

> The split of the original Alice Cooper group for artistic reasons; and

> The influence of real life tragedies on the Brutal Planet album.

The booklet provided is exactly the same as the original release.

This budget European re-issue of Brutal Planet comes in a jewel case, and features a live image of Alice (from the Trashes The World tour).

Also included is an interesting booklet, which features a 2-page biography plus handy matrix tables showing most of the Alice Cooper (band and solo) single and album releases and chart positions in the USA, UK, Germany, Holland and Australia. At the back of the booklet are track titles and credits.

This further budget European re-issue of Brutal Planet features different artwork throughout. Instead of the dark artwork of the original, we get a computer generated image of a snake set against a dark red background.

Also on offer is a jewel case, a CD complete with further snake artwork and an 8-page booklet featuring track listings, credits and a biography on Alice's early years (this is slightly odd seeing as the album, which is not mentioned at all, came out in 2000!).

Pick Up The Bones CD Album

To the untrained eye, this European CD of 'His Latter Recordings' might appear to offer a selection of songs covering Alice's 21st century albums. Instead, this is actually just Brutal Planet with a different name and artwork.  It's a good job then that Brutal Planet is a fine album, but the packaging is certainly a bit misleading for what is, in truth, a non-essential purchase.

This release features a card slip case and a jewel CD case complete with a simple paper inlay, which includes track listings and credits.

Following hot on the heals of the bizarre Pick Up The Bones (above) is this further European release. Again, it is just the original version of Brutal Planet but the title has swung completely the other way by implying that it includes music from 'The Early Days' of Alice's career. Whilst Alice is indeed the undisputed king of shock rock, this material is the best part of 30 years after he achieved that status.

This release features a jewel CD case complete with a simple paper inlay, which includes track listings and credits.

NOTE: Further CD copies of this album are featured in the Compilations section of this website.

This USA promotional CD comes in a jewel case and features the radio and album versions of Gimme plus the unedited 'exploding heads' music video.

The version of Gimme is the almost the same as that featured on the Brutal Planet album, but is about 30 seconds shorter and does not include the spoken "Nothing's Free" segment in the middle of the song.

The banned video of Gimme is essentially the same as that viewed on MTV at the time, but includes the final few seconds where the heads of the boy band explode.

This USA promotional CD comes in a jewel case and features only the album version of Blow Me A Kiss.

This USA promotional CD comes in a jewel case and features only the album version of It's The Little Things.

This uninspiringly titled European CD features Alice providing short (generally about 60 second) answers to 14 questions, the majority of which are centred around the Brutal Planet album. The questions asked can be seen in the inlay image below. Additionally, the track Blow Me A Kiss is provided in full at the end of the CD (which is a CD-R variety).

This large unapplied vinyl sticker was used to promote the Brutal Planet album in the USA and is slightly smaller than that of a CD case. 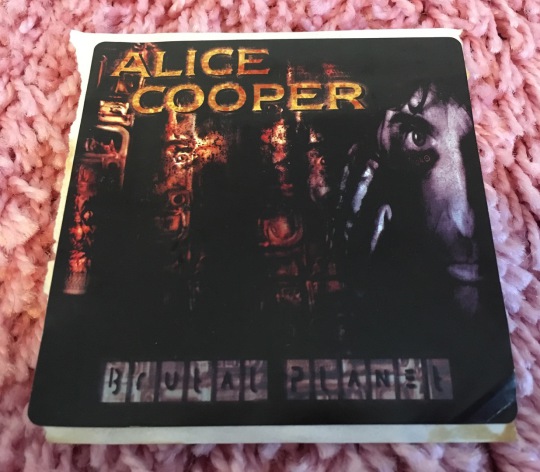