Dragontown is the 22nd 'Alice Cooper' studio album and was released in 2001. Released just a year after the well-received Brutal Planet, the new album continued Alice's embrace with industrial-sounding metal, as he guided listeners around "the worst town on Brutal Planet".

Whilst similar sounding, the big difference between the two albums is that the former was a largely observational commentary of real life, whereas the latter is a more fantasmical offering. The other point to note is that Brutal Planet was Alice's first album in six years, whereas Dragontown was produced in less than 12 months, so it was always going to be tough to maintain such a high standard. There is also a distinct possibility (although never confirmed) that some of the songs on Dragontown were unused material from Brutal Planet.

The high-tempo Triggerman introduces us to the lord of the manor, who secretly controls everything in Dragontown. Deeper is the polar opposite, a gloomy slow-burner that details the one-way descent into Dragontown.

The title track is a marvellously atmospheric number as Alice welcomes you to Dragontown and warns of the horrors that await any visitor. Sex, Death and Money is another stellar piece that makes you aware of the three main commodities of Dragontown. The swaggy Fantasy Man is Alice's witty protest against the domestication of man, firmly stating that "I ain't gonna change" to anyone that dare try.

The album takes a turn for the worse with Somewhere In The Jungle, a rather plodding effort about genocide that fails to reach the heights of the similarly-themed Pick Up The Bones from Brutal Planet. The thumping Disgraceland sees Alice poking light-hearted fun at the decline of one of his idols, Elvis Presley, who's unfitting death appears to have made him worthy of a place in Dragontown. It's plain silly, but in fairness to Alice, he does a decent impression of him!

The punchy Sister Sara, a modern take on From The Inside's Nurse Rozetta which sees a sex-crazed nun confined to an eternity of hell, is a wonderfully intelligent song with the sharpest of lyrics. Every Woman Has A Name is probably one of the classier ballads that Alice has written (even if it again explores the subject of female inequality) and his delivery is first class.

The closing trio of I Just Wanna Be God, It's Much Too Late and The Sentinel close the album out in solid, if unspectacular, fashion and leave you with little doubt that Brutal Planet is the superior album of the two. This point aside, Dragontown, whilst somewhat dis-jointed, is a very decent offering. 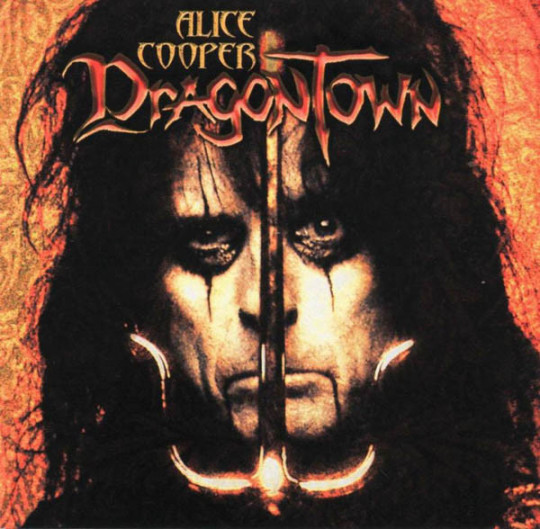 Like Brutal Planet, Dragontown was not subject to a vinyl release when it first launched in 2001 as the format had near-enough died out by that stage. It wasn't until 2011 (around the time of its revival) that Night Of The Vinyl Dead addressed this with this European limited-to-500-copies edition.

The vinyl comes in a simple card sleeve with 2 oriental themed inner sleeves. Inside the first are 4 large card posters, including blown up images from the original CD booklet (below), plus a 2-sided sheet featuring track listings, lyrics and credits. Inside the other sleeve is the black vinyl album and a whole is cut out on one side to give a view of the label of Side A. Both the custom vinyl labels feature the same image of Alice.

As with the original release, the front cover features an image of Alice in full make-up holding a samurai sword. The limited edition number is hand-written on the back of the sleeve (this one being #370).

This alternative 180 gram vinyl version of Dragontown by Back On Black features a gatefold sleeve design. On the inside are track listings, lyrics and credits. Also, as this is the first pressing, it features an opaque orange vinyl disc (with later versions, such as that below, featuring black vinyl instead). The custom vinyl labels both feature an oriental orange and red design.

This further European vinyl version of Dragontown is exactly the same as the above but features a black 180 gram vinyl disc instead.

Having the album spread over two discs initially seems somewhat bizarre, as previous releases proved that it comfortably fits on a single disc (even with the addition of bonus tracks, which this doesn't have). This means that you have to play it at 45 RPM speed, which is the traditional speed for 7" vinyl singles. However, it is also the optimum speed for audiophile vinyl albums and this is presumably why the decision was taken.

A similar release of Brutal Planet was subsequently released by eOne for Record Store Day 2022.

This 'Limited Edition' European 12" vinyl re-issue of Dragontown by Ear Music features a gatefold sleeve and includes a black 180 gram disc. This is exactly the same as the copy included in the 2019 Treasures box set (also by Ear Music) only that the disc is no longer coloured and a 'Virgin Vinyl' hype sticker is provided on the front of the sleeve.

As with the copy provided in the Treasures box set, this version again, somewhat randomly, includes the former Brutal Planet CD bonus track Can't Sleep, Clowns Will Eat Me (ref: 8573839032).

Dragontown was subject to a release on cassette in Eastern Europe. This version comes from Ukraine and includes the standard 13 tracks found on the original CD version of the album.

Interestingly, the album is titled 'Dragontow' on the case so it seems like something got lost in translation!  No reference to the album is made on the cassette itself although a quick play has confirmed that it is indeed DragontowN!

This European promotional CD does not have a product code, features a crude paper sleeve (with poor quality printing) and a blue CD-R. On the back of the sleeve are track listings for the album. Both the CD and inlay state 'STRICTLY FOR PROMOTIONAL USE ONLY - NOT FOR RESALE'.

This European CD version of Dragontown comes in a jewel case and includes a colour booklet that folds outwards and includes some images of Alice, track listings, lyrics and credits.

A year after the release of Dragontown came this additional European 'Limited Tour Edition' release. The CD and jewel case are the same as the original version (above). Also included, however, is a blue-tone slip case and fold-out poster featuring an expanded version of the artwork from the front cover. Additionally, the CD now features the additional content of the Australian Brutal Planet bonus track Can't Sleep, Clowns Will Eat Me, the video of Gimme (also from Brutal Planet) plus a screensaver.

There does not appear to be any information available on how 'limited' this release was, but my 2 copies (one used and one sealed) are numbers 08631 and 00005 respectively.

The latter copy previously belonged to someone involved in the production of the album and is provided with an additional sticker on the back that states 'PROMOTIONAL USE ONLY NOT FOR RESALE'. That aside, it is exactly the same as the other two copies (as indicated by the fact that it also features the unique copy number, albeit a very low one).

USA fans were treated to this alternative 'Special Edition' CD version of Dragontown. Limited to 7,500 copies (at least initially), this featured a white slip case with shiny red text and a bonus CD. I have seen some of these with a unique copy number sticker on the front (see example image below), whereas neither of my two, one of which is still sealed, have them. It sounds like whilst this may have been originally been limited to 7,500 individually numbered copies, it was then re-issued without the numbering.

The bonus CD also includes the Australian Brutal Planet bonus track Can't Sleep, Clowns Will Eat Me (but is described as simply 'Clowns Will Eat Me'), live versions of Go To Hell and Ballad of Dwight Fry (both from the 2000 Brutally Live concert release) plus a rare, and rather random, 'Remix' of Brutal Planet. Also included on the bonus disc are the videos for Gimme and It's The Little Things (also from Brutal Planet).

This budget Czech Republic CD re-issue of Dragontown features a unique A5 card sleeve that includes the same artwork as the original release (above) on the front and back. Additional 'CD Sport' branding and promotional material for other releases are also provided.

The CD simply slots into the top of the sleeve. No booklet is provided, making this a very basic package.

NOTE: Further CD copies of this album are featured in the Compilations section of this website.

This USA promotional CD comes in a jewel case and features 2 versions of Triggerman ('Remix' and 'Album Version') plus It's Much Too Late. Although the remix of Triggerman sounds interesting it is, in fact, simply the album version but without the 40 second instrumental at the end.

It's Much Too Late Promotional CD Single

This rare Swedish promotional CD single comes in a simple card sleeve and features It's Much Too Late and Fantasy Man (both from the Dragontown album). The CD is completely blank and there is no product code provided. The sleeve states 'For promotional use only'.

This European promotional CD (which is a CD-R variety) features Alice providing short (generally about 60 second) answers to 15 questions, several of which are centred around the Dragontown album. The questions asked can be seen in the image below.

Both the CD and sleeve state 'STRICTLY FOR PROMOTIONAL USE ONLY NOT FOR RESALE'.

This 2-page UK press release by The Publicity Connection features an interesting background on the Dragontown album, which is described as the completion of "the trilogy of albums which begun with The Last Temptation back in 1994". Also provided is information on the production of the album, track listings and tour details. A release date of 8th October 2001 is stated.

For the The Eyes Of Alice Cooper era Click Here.