Dada is the 15th 'Alice Cooper' studio album and was released in 1983. The final of his 'Blackout' period albums, and recorded at the height of his drug abuse, this mysterious, avant-garde, album is a notable departure from the preceding early 80's albums Flush The Fashion, Special Forces and Zipper Catches Skin (which were all heavily punk influenced).

The eerie, spoken-word, title track opens the album, followed by the parent-angst Enough’s Enough and the brooding Former Lee Warner. The mood lifts with the more melodic No Man’s Land and Dyslexia before arriving at the showpiece track, Scarlet And Sheba, a magnificent power ballad full of personality and signature Alice vocals.

I Love America, Alice's overblown tribute to his home country seems somewhat lost on this album but provides some needed light relief before Fresh Blood and the epic closer Pass The Gun Around, the darkest of songs and a cryptic cry for help by the suffering real-life Alice of the time.

Such was the negative state of Alice's health, Dada received almost no publicity (indeed, many fans didn't even know it had been released). There was also no tour, which resulted in his final album for Warner Brothers being an inevitable commercial failure. This was perhaps a necessary catalyst for Alice to seek the help he needed, to clean-up and then re-invent himself as a person and an artist during a forthcoming three-year hiatus.

Dada is now revered by many fans, with it often cited as Alice's deepest, darkest, album. It is certainly an unappreciated masterpiece and may also be the most important release of his life. 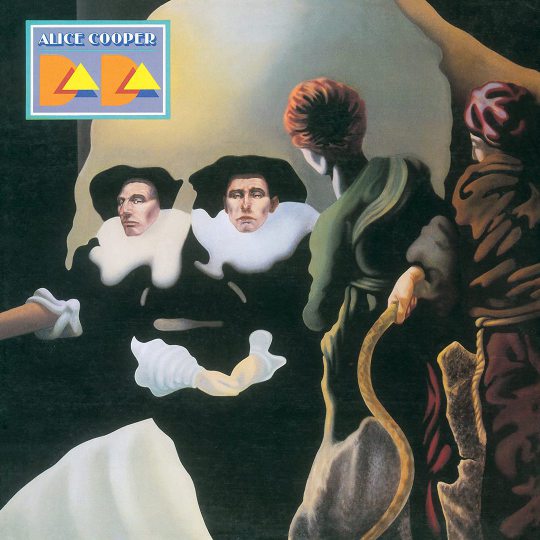 This USA 12" promotional vinyl album comes in a simple card sleeve and features an optical illusion image adapted from the Salvador Dalí painting Slave Market With The Disappearing Bust of Voltaire (can you see the creepy-looking head?). Also provided on the front cover is a gold 'LENT FOR PROMOTIONAL USE ONLY...' stamp, which was also used on promotional copies of the Zipper Catches Skin album. On the rear of the sleeve are track listings and credits, as no inner sleeve was produced for this album.

The disc is housed in a generic Warner Brothers sleeve and features cream Warner Brother labels, which are identical to USA stock copies (i.e. the gold stamp on the front is the only way to differentiate promotional copies from stock copies).

This UK vinyl version of Dada comes in a simple card sleeve and features a black vinyl disc complete with cream Warner Brothers labels. On the rear of the sleeve are track listings, lyrics and credits.

This European 140 gram vinyl re-issue of Dada is almost identical to the original release (above) only that it now has a nice partially translucent 'Orange Swirl' effect vinyl and associated hype sticker on the front of the sleeve. The disc features the familiar Warner Bros labels and was limited to 4,500 copies worldwide.

This USA cassette version of Dada features a simple J-card containing abridged artwork, track listings and credits. Inside is a white tape with additional track listings.

This European CD version of Dada, the last Alice Cooper album released under the Warner Brothers label, comes in a jewel case and features an 8-page booklet containing track listings, lyrics and credits.

NOTE: A further CD copy of this album is included in 'The Studio Albums 1969-1983' boxset and can be seen here.

After being treated exclusively to the For Britain Only single a year earlier, the UK again saw a unique release in the shape of I Love America in 1983. The fact that the song is all about America is testimony to the strength of Alice's loyal following in the UK at the time, when fans in other countries had lost interest during a period of commercial and, to some, artistic decline.

This 12" vinyl single features cream Warner Brothers labels, a card sleeve and includes I Love America On Side A and Fresh Blood and Pass The Gun Around on Side B (all from the Dada Album).

The front of the sleeve features an image of Alice performing live whilst holding aloft an American flag, whereas the back features track listings and promotional material for the Dada album.