My name is Charles and I've been an Alice Cooper fan since the age of 14, when I listened to the Hey Stoopid album for the first time in 1992. My only previous experience was the UK hit single Poison, which my brother used to play non-stop in the late 80's (ironically, I didn't like it that much!). 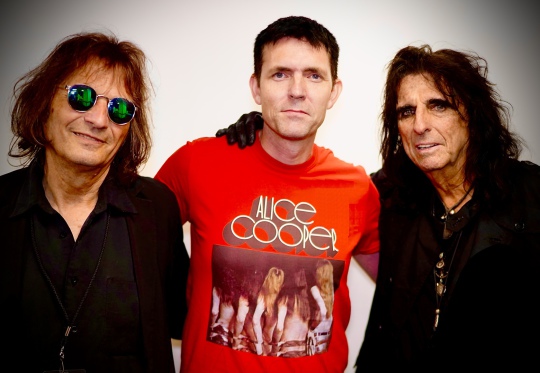 Dennis Dunaway, Alice Cooper and I in Brighton, UK (2019)

I began collecting Alice Cooper memorabilia in the mid 90’s during weekly trips to my local record store in Yeovil, Somerset. I really stepped up my collection from 2010 onwards, however, by using the near endless resources that the internet has to offer.

I'm by no means a completist but do have quite a lot of cool stuff and take great pride in every item I have. I also am not generally one to just buy something and leave it in its packaging, so will usually crack open my items to experience fully and take photos.

This is not, and never will be, the definitive Alice Cooper site, but I'm hoping it will be one of the most liked and informative. Also, and as a comparatively young fan (at the time of writing at least), one of my main aims is to help keep the Alice Cooper legacy alive for many years to come!

I first saw Alice perform live in 2000 during the Brutal Planet tour, which was a really memorable show. I've gone on to see him many more times since with the highlight being in 2017, when he returned to the UK with the surviving members of the Alice Cooper Group after 43 years.

Whilst originally a fan of Alice Cooper the man, I have grown to become an avid follower of the original Alice Cooper Group and have huge respect and appreciation for the pivotal role played by Neal Smith, Glen Buxton, Dennis Dunaway and Michael Bruce (plus Cindy Dunaway-Smith). Without them, there would not have been an 'Alice Cooper' and the music they created easily remains some of the best that Alice (formerly Vincent Furnier) has been a part of. It is a personal regret that I wasn’t able to witness for myself the musical and cultural impact that the Group had in the early 70's. 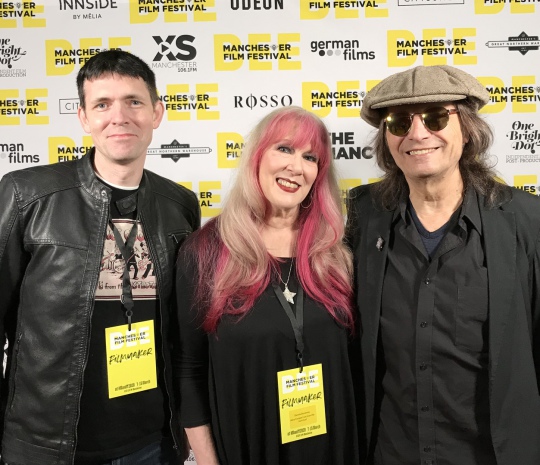 Dennis Dunaway, Cindy Smith-Dunaway and I in Manchester, UK (2020)

I would like to pay special thanks to the various (not to mention superb) sources of Alice Cooper information that are available. These include, but are not limited to the following:

The Collector’s Guide to Alice Cooper (Editions 1 and 2), Dale Sherman

Additionally, there are various persons connected with the Alice Cooper family who have offered me advice and support (you know who you are).

Finally, I would like to make it clear that I will never knowingly attempt to infringe anybody’s copyrighted or personal material. If I have done so then I apologise and will happily remove / blur such items upon request. I use fairly low resolution pictures with the aim being to showcase the general content of items whilst not acting as any kind of substitute for having the real thing. Conversely, for very rare items, it's a chance to share with other fans what they have to offer inside.

I hope you enjoy the website and thanks for visiting!