Read my review of this album here.

As with all of the Japanese SHM CD's, this version faithfully recreates the original vinyl release.  Easy Action was fairly basic in the first place so this is obviously reflected here (including the incorrect order of the track listing). An 'Obi Strip' is also provided (a common feature on Japanese music releases).

NOTE: A further CD copy of this album is included in 'The Studio Albums 1969-1983' boxset and can be seen here.

This USA 1st pressing of Easy Action comes in gatefold format on the Straight label and features 2nd generation Straight vinyl labels. One notable aspect is that the last 2 tracks (Beautiful Flyaway and Lay Down And Die, Goodbye) are stated in an incorrect order on the back of the sleeve.  They are correct on the vinyl label, however.

This Canadian 1st pressing of Easy Action is identical to the Straight USA version (above) with the notable exception that it features gold Warner Brothers vinyl labels. These were used on Warner Brothers albums up until the late 60's (Easy Action was recorded in 1969, so appears to have just made the cut) prior to the change to their iconic green labels.

Other than this release, and somewhat randomly, this style of label was apparently only seen again on Mexican pressings of Killer, School's Out and Billion Dollar Babies.

This UK 1st pressing of Easy Action features an alternative Straight logo on the front and back compared to the USA version (above) and reconfigured 2nd generation Straight vinyl labels. Also, the rear of the sleeve has some additional text from the manufacturer added at the bottom.

Unlike the USA and Canadian versions, UK owners were also treated to the final 2 tracks being presented in the correct order on the sleeve.

Picking up a good condition original copy of Easy Action at a good price is not easy. Thankfully, Rhino Records re-issued the album in the USA on 180 gram vinyl, featuring Warner Brothers Palm Tree vinyl labels, in 2009.

This is a rather basic reproduction with a simple card sleeve, but is worth getting hold of if you don't have an original copy. This copy also has the incorrect track listing from the original release on the back of the sleeve.

This further 'Collectors Limited Edition' USA vinyl re-issue of Easy Action by Rhino Records is the same as the above version only it features an alternative hype sticker on the front and an opaque pink marble effect disc.

This further USA vinyl re-issue of Easy Action by Rhino Records is the same as the above version only it features an opaque green marble effect disc.

This 140 gram vinyl version of Easy Action was released in January 2018 at the same time as additional releases of Killer and Welcome To My Nightmare. Each featured different colour vinyl and production numbers with this one pressed in opaque gold and being limited to 4,600 units worldwide.

Unlike the above re-issues of Easy Action this version retains the gatefold design of the original album but, interestingly, does correct the track listing error on the back of the sleeve. Also, this version features the classic green Warner Brothers vinyl stickers.

Unfortunately, this version will forever be notable for one reason.  It was discovered just 6 days before release date (Friday 26th January 2018) that all 4,600 units had accidentally been pressed with the music of the Killer release. To make matters worse, all the Killer vinyls (5,200 in number) were pressed with Easy Action music resulting in 9,800 faulty products. Doh!

Upon idenifying this issue a recall letter was quickly issued to retailers (see example image below), but it didn't stop several making their way out of shops. Nobody knows how many people obtained them but these will probably become quite sought after, as this is a curious error. In the case of this album, the error is highly ironic given the legendary Bizarre version of Easy Action (see below).

The Alice Cooper band signed to record producer Frank Zappa's Straight label in 1968, with their first album (Pretties For You) following a year later.  In 1970, around the time that Easy Action was released, Zappa released the promotional sampler Zapped.  This record featured music from his signed artists including Zappa himself, Captain Beefheart And His Magic Band, Tim Buckley, The GTO's and, of course, Alice Cooper (the featured tracks being Titanic Overture and Reflected, both from Pretties For You).

In addition to Straight, Zappa had another label called Bizarre.  As the names suggest, Straight was designed for his more mainstream artists wheras Bizarre was the home to some of his more obscure acts.  One might argue that Alice Cooper being signed to Straight was (pardon the pun) rather bizarre but it was clear that Zappa, even at this early stage, saw the potential commercial success that the band might achieve.  Zapped featured artists from both labels yet only featured the distinctive blue Bizarre labels on the Vinyl itself.

Zapped was not available in stores, instead fans had to send a mere $1 dollar in the post with it turning up several weeks later.  Clearly, this album was not a profitable venture but it's value to Zappa was that it presented a platform for him to showcase his artists to fans that may otherwise never get to discover them.

Zapped was produced with 2 cover variants, mine features a portrait picture of Zappa wheras the alternative featured a collage design.  My version features a simple card sleeve, the vinyl is contained within a paper sleeve which includes some of Zappa's principles towards record production.

This is one of the most interesting and sought-after of Alice Cooper collectables. The reason for this is that, whilst the sleeve is the same as the more common Straight-labelled copy with the same code (see above), the vinyl features blue Bizarre labels. Alice Cooper was signed to Frank Zappa's Straight label, not his Bizarre sister-label, so this is a genuine anomoly.

Various stories exist regarding how this occured and how many copies exist. One plausible explanation is that, during the pressing of Easy Action, a number of records were accidentally stamped with Bizarre labels that were supposed to be used on a different release. This may, possibly, have been a result of confusion brought about by the fact that Alice Cooper appeared on the Bizarre-labelled Zapped album (above). It should be remembered at this point that this is the same manufacturer that managed to get the order of the last 2 tracks in the wrong order on the back of the album sleeve!

One suspects that this error was identified fairly quickly with most the mis-printed stock removed and destroyed. Clearly though, some made it out of the factory and into record stores. Exactly how many is unknown but, given the very small number that come up for sale, I suspect that there may be less than 50 doing the rounds. The funny thing is that some may still be sat in people's attics or in car boot sales. For those in the know though, they are able to command many hundreds of dollars to the right buyer!

My copy was purchased on eBay from the son of Glenn Danzig no less (allegedly). The seller was able to provide the following information on the origin of this record for me:

I got this from Natalie Natero, who passed away in 2007.  She was a big Alice Cooper fan and also dated me and my father (true story)!  I got this back in 1999 as a Christmas gift.

This copy is in truly excellent condition with minimal wear-and-tear to the sleeve. The vinyl is in perfect condition and plays beautifully (before you ask, yes it does actually feature the music from Easy Action).

This record came in at Number 4 on a list of the top 5 rarest Alice Cooper group vinyl releases (the rest all being early single releases).

For more information on this most collectable of items, visit this excellent Facebook page!  At the time of writing, only ~12 copies of this album (including mine) have been accounted for. Two of the most recent copies to come up for sale, in February 2016 and June 2020, sold for whopping totals of $665 and $750 respectively (see images below). 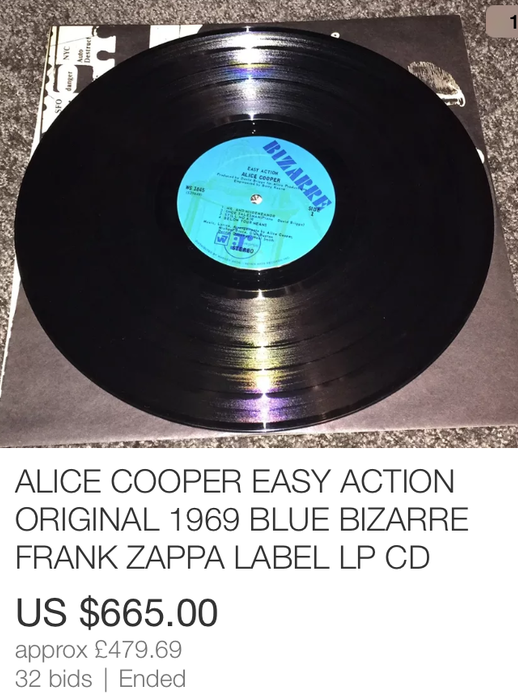 Screen shot from eBay auction for same record in February 2016 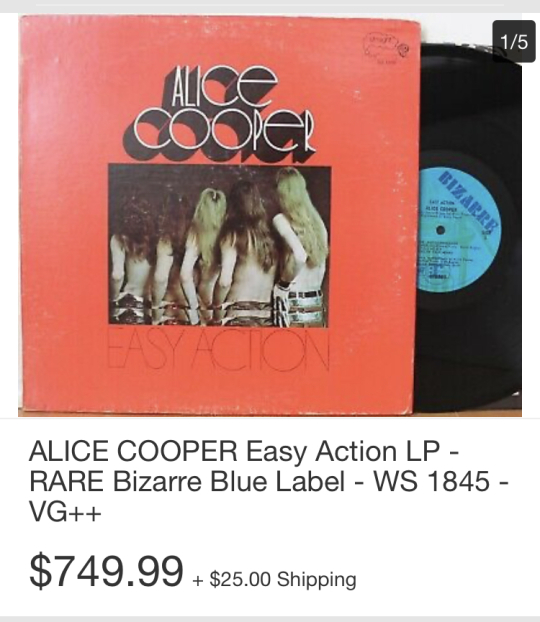 This USA promotional 7" vinyl single features white Warner Brothers labels and includes Shoe Salesman on Side A and Return Of The Spiders on Side B (both from the Easy Action album).

Each label includes an 'Intro' time, which helped DJs to understand how long they had to introduce a song prior to the lyrics beginning.  For some reason, this wasn't enough for the DJ that used to have this copy as exactly the same timings are hand-written on both labels.  Side B has a few other hand-written markings ("C-268" and "X"), but I've no idea what they mean.

Finally, a notable feature of this release is that Glen Buxton is shockingly reffered to as 'Glen Baxton' on the labels!  I think it's fair to say that the Easy Action era was the most cursed for unfortunate pressing errors!

This rare Canadian 7" vinyl single features green Warner Brothers labels (the first Alice Cooper single to do so), comes in a Warner Brothers paper sleeve, and includes Shoe Salesman on Side A and Return Of The Spiders on Side B (both from the Easy Action album).

As with the USA promotional copy (above) Glen Buxton is reffered to as 'Glen Baxton' on the labels!

This USA promotional 7" vinyl features white Warner Brothers labels, a Warner Brothers paper sleeve, and includes 2 identical 60 second 'Radio Spots' for the Easy Action album on both Sides A and B.  Radio Spots were basically audio adverts that were given to DJs by music labels in order to promote their latest releases between songs.

A transcript for the 2 Radio Spots included on this release is provided below:

Music: Return of the Spiders

Alice Cooper, such a lovely child.  Pity though, she’s so violent.  Alice Cooper is unisex, raw, together and violent, just like you fellow American. Because there’s a little bit of Alice cooper in us all!

Now look, you wouldn’t really want to take a thing like Alice Cooper home to mother would you?  Alice Cooper, their new album Easy Action, all for you on, you’ll forgive the word, Straight Records!

A Radio Spots release also exists for the Love It To Death album.

For the Love It To Death era click here.