Paranormal is the 27th 'Alice Cooper' studio album and was released in 2017. Unlike previous albums Welcome 2 My Nightmare and Along Came A Spider, Paranormal is not a concept album and instead simply contains a collection of straight-forward rock songs. It is therefore much more in keeping with the likes of the other 21st century albums The Eyes Of Alice Cooper and Dirty Diamonds.

This album was released under the Ear Music label and things got off to a somewhat shaky start when the cover was revealed, featuring a computer generated double-headed Alice (one looking solemn-faced and the other in classic Alice ’snarl’ pose). I think it was fair to say that this wasn’t what many fans were after as, to them; it was a hint of a possible comedy / parody album. Combine this with song titles like Genuine American Girl (which sounded suspiciously similar to the love/hate The Saga Of Jesse Jane from Dirty Diamonds) and expectations amongst some fans begun to lower before they’d heard a single second of the new material!

One good thing about the cover though is that the image of Alice contrasted nicely with the white background and this had quite a positive impact when it was stacked on the shelves in record stores. This may possibly have helped the album achieve strong sales in the weeks following its release, with it featuring in numerous top 10 charts across the world.

The album saw Alice collaborate with a number of artists, including Tommy Henriksen (from the Alice Cooper Band), Larry Mullen (U2), Billy Gibbons (ZZ Top), Roger Glover (Deep Purple) and Steve Hunter (a long-time contributor to all things Alice Cooper). Most excitingly of all though was the return of former Alice Cooper Group members Dennis Dunaway, Michael Bruce and Neal Smith, who all feature on Rats and two bonus tracks (Genuine American Girl and You And All Of Your Friends). Dennis also  features on The Sound Of A, which he and Alice originally wrote in 1968!

Initial copies of the album also came provided with six bonus live tracks, but they are sadly only much-played solo tour tracks taken from the 2016 Spend The Night With Alice Cooper tour at Columbus, Ohio. It would have been much more fitting if the live tracks were those of the Live From The Astroturf Group performance at Good Records, Dallas in 2015 (thankfully, an LP of these tracks was released in 2018). 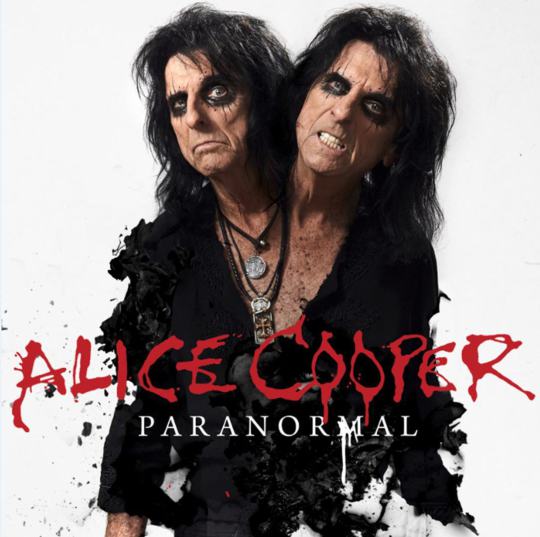 This European vinyl version of Paranormal is limited to 3,000 units and features a nice gatefold sleeve design complete with great blown-up images of Alice on both the inside and vinyl sleeves. The album is provided on two glossy black, 180 gram discs containing three tracks each.

An interesting aspect of the vinyl release is that the two tracks with the surviving Alice Cooper Group members that featured on the bonus disc of the CD version (below) are now provided between Rats and The Sound Of A (one would argue, where they should have been in the first place) so they essentially now form part of the album proper.

The other item of note is that the live tracks that also featured on the bonus disc of the CD version are neatly provided on a bonus CD of their own, which comes in a simple card sleeve. This is a very nice touch by Ear Music and makes you feel that no expense has been spared in offering fans a complete listening experience at good value for money. The only thing missing from this excellent offering is a download code for the tracks on MP3 format.

In addition to the black vinyl version of Paranormal (above), an alternative European opaque red vinyl version was also produced. This was also limited to 3,000 copies and is exactly the same other than the distinctive red 180 gram discs, an alternative hype sticker on the front and a different barcode on the back (that is stuck over the orginal one). The product code remains the same on the vinyl labels though.

This further European vinyl version of Paranormal was released in 2019 and is exactly the same as the black version (above) only that it features opaque white vinyl discs, an alternative hype sticker on the front and a different barcode on the back (that is stuck over the orginal one). The product code of this release remains the same on the vinyl labels though.

One final difference is that it does not feature the bonus CD, but then I guess most would already have this from the original releases (above).

This French promotional CD features a simple card sleeve and includes Paranormal, Fireball and Paranoiac Personality (all from the Paranormal album). Inside is an unlabelled blue CD-R. The label on the front of the sleeve indicates a release date of '28.07.2017'.

This European version of Paranormal comes in a 'Digipak' featuring 2 CDs, the first of which contains the 10-track album with the other being a bonus CD featuring 2 songs by the surviving Alice Cooper Group members (Genuine American Girl and You And All Of Your Friends) plus six live tracks from Alice's solo show of May 2016 at Columbus, Ohio.

This limited edition European version of Paranormal on CD features a deceptively deep box containing the standard CD (above) minus hype sticker plus a Parnormal-themed T-shirt that is folded to within an inch of its life (which frustratingly only came in extra large size, so pretty useless to many fans).

On the rear of the case is a sticker showing the contents and confirming the tracks. Randomly, the sticker is orientated the other way to the cover, so you have to turn the box to read it.

Overall, this is pretty cool but it doesn't really offer much of interest over the standard CD. A choice of T-shirts sizes would definitely have helped!

This European CD version of Paranormal was released just before the 2017 UK tour and was marketed on Amazon as a 'Tour Edition'. Any excitment ends there though as it is actually just a stripped down version of the original Digipak release (above) and there is no actual reference to it being the Tour Edition on the packaging itself. Just one CD is contained in a jewel case, which features the full album and 2 bonus tracks bolted on at the end (the live material is dropped entirely).

The most notable aspect of this release is that it probably features the largest hype sticker that I've ever seen for a CD. It obliterates nearly half of the front cover! The booklet is excatly the same as the original release only that the front cover is different.

This European promotional CD single comes in a plastic wallet, features asimple folded paper sleeve, and includes the album version of Paranoic Personality only. The CD (which is a blue CD-R type variety) states a release date for the Paranormal album of '28 July 2017'.

The back of the wallet sleeve includes a sticker on the clear wallet stating:

'earMUSIC is proud to announce the worldwide signing of legendary shock-rocker Alice Cooper. "Paranormal", Alice Cooper's new studio album, his first in 6 years, is to be released on July 28th, 2017 on ear MUSIC. The 12-track album has been recorded in Nashville with long-time collaborater Bob Ezrin and features a very special bonus CD - a mini-album consisting of three brand new songs written and recorded together with the original Alice Cooper band.

Alice Cooper will be touring extensively this year in support of "Paranormal", visiting cities in the USA, Europe, Australasia'.

The mention of 3 brand new songs involving the original Alice Cooper Group on the bonus CD didn't end up being correct, as it eventually only featured Genuine American Girl and You And All Of Your Friends. It may, however, may have possibly been referring to Rats, which did involve all the surviving members of the Group and ended up on the album proper.

Note: There appears to be more than one version of this CD, with at least two variants present featuring very minor difference on the CD labels (see example image below).

This European 7" opaque white vinyl single features the album version of Paranoic Personality from Paranormal on Side A plus the excellent version of I'm Eighteen from the Live From The Astroturf single (which was recorded at Good Records in Dallas in 2015).

The single, like the album, features a bold cover with Alice in spider eye make-up set against a bright white background.

The Sound Of A CD EP

The second single release from the Paranormal album was this European EP offering of The Sound Of A. Also featured are 4 live tracks from the Spend The Night With Alice Cooper solo show at Columbus, Ohio on May 06th 2016. These are opener The Black Widow, the rarely played (and great sounding) Public Animal #9, Is It My Body and Cold Ethyl.

This version is presented in a nice Digipak design featuring close-up / cut-off images of Alice in full 'Spider Eyes' make-up. Inside the front cover are track listings and credits.

In addition to the above CD release, The Sound Of A was also subject to a rare European 10" EP vinyl release. The track contents are the same with the opaque white vinyl disc nicely matching the previous 7" vinyl single of Paranoic Personality (see above).

The artwork is identical to the CD version with the vinyl sliding into a simple card sleeve. Unlike the CD version though, the vinyl was an individually hand-numbered, limited edition, release with mine being #2,318 of 4,000 (as shown above the barcode on the bottom right of the rear sleeve).

Update: It has since come to light that Ear Music rather sneakily extended the production of this 'limited edition' release by a further 2,000 copies. See the images embedded below for more details.

This press kit was issued to persons attending the UK 'Paranormal Album Event' at the Secret Masonic Temple in London on 29th June 2017. The kit features a white Ear Music card wallet and includes a one-page welcome letter, a list of European tour dates and a nice glossy photo of the Paranormal album cover hand signed by Alice.

For the A Paranormal Evening concert releases Click Here.