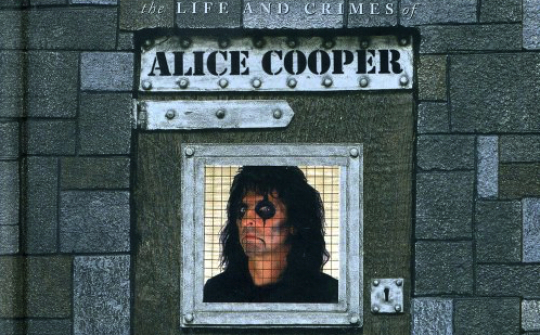 The Life And Crimes Of Alice Cooper

The Life And Crimes Of Alice Cooper CD box set was released in 1999 and provided a comprehensive biography of 'Alice Cooper' at the time, starting with The Spiders in 1965 and running all the way through to 1999 (i.e. just before the Brutal Planet album). It is understood that about 60,000 copies of this box set were produced in total.

A notable aspect of the set is that it includes at least one track from every studio album. Additionally, there are a wealth of rarities including B sides, demos and collaborations with other artists. Stand-out material includes:

> Four pre-Alice Cooper tracks by The Spiders (Why Don't You Love Me, Hitch Hike and Don't Blow Your Mind) and The Nazz (the 'Original Version' of Lay Down And Die, Goodbye);

> A demo version of the unused Pretties For You track of Nobody Likes Me;

> The Muscle Of Love demo Respect For The Sleepers (which would eventually become the song that was named after the album);

> The Sexette movie track No Time For Tears;

> The cover of The Beatles' Because with The Bee Gees;

> The Special Forces demo Look At You Over There, Ripping The Sawdust From My Teddybear;

> The Monster Dog movie tracks Identity Crisis and See Me In The Mirror;

> The Friday The 13th Part VI movie track Hard Rock Summer, plus a demo of He's Back (The Man Behind The Mask) from the same film (which would eventually become the song Trick Bag on the Constrictor album);

> A version of Under My Wheels by Alice and Guns N' Roses from the documentary film The Decline of Western Civilization Part II; and

> The 'Spookshow 2000 Remix' of the Hands Of Death collaboration song with Rob Zombie (which originally appeared on the album Songs in the Key of X: Music from and Inspired by the X-Files).

There is also a superb 80-page colour booklet featuring:

> A foreword by Alice Cooper;

> A testimonial by John Lydon (from The Sex Pistols);

> 'Look Behind The Songs' by 'Alice Cooper and cohorts'; and

In total there are 81 tracks, spread over four CDs, making this the definitive 20th century Alice Cooper collection. It is a fitting legacy to Brian Nelson, who described himself as 'The World's Biggest Alice Cooper Fan' and was to pass away 10 years later aged just 49.

The Life And Crimes Of Alice Cooper Promotional CD Sampler

This USA promotional 'sampler' CD comes in a simple card sleeve with large orange stickers on both the front and back. The CD features 16 tracks from the box set including most of the main Alice Cooper Group and solo hits, plus a few other more interesting selections (including Clones, Hands Of Death and Stolen Prayer).

The front sticker announces the release of the full box set as being 20th April 1999 and a suggested retail price of $59.98. The sticker on the back provides details of the recording artists, songwriters and producers who are also represented in the boxset.

Both the front of the sleeve and CD state 'NOT FOR SALE - FOR PROMOTIONAL USE ONLY'.

The Life And Crimes Of Alice Cooper Promotional CD

This German promotional CD is very rare, with only a handful thought to exist. It comes in a jewel case complete with paper inlay, which states 'The Unreleased Songs From The 4 CD Box-Set' on the front and features track listings on the back. The front also states 'For Promotion Only!'.

Although many of the 24 tracks are made up of the unreleased tracks from the final box set, not all of them are (e.g. Fire and Welcome To My Nightmare) and some are missing (e.g. Call It Evil and No Time For Tears). This is a shame as it would have been good to have a CD with just the exclusive material on it.

Another point of note is that the version of Hands Of Death included here is not the same as that in the final box set (e.g. the Spookshow 2000 mix). Instead, it's the original version from 1995.

The original European version of The Life And Crimes Of Alice Cooper box comes in a chunky box, which was designed to look like the door to a cell. Alice, of course, is lurking behind the door with a neat 3D effect used thanks to some clever plastic packaging. The CD's are housed in jewel cases with each one featuring nice images and artwork from the era that they relate. Although there is plenty of Alice Cooper Group material on offer, the artwork is mainly devoted to Alice. The booklet if found nestled on top of the CD's.

This European re-issue of The Life And Crimes of Alice Cooper box set is exactly the same as the original release (above) only that the nice 3D feature has been dropped with Alice now forming part of the front cover artwork. This also means that the box is also slightly thinner than before.

This further European version of The Life And Crimes Of Alice Cooper features an alternative 'Media Book' style format. The CD's are now housed on the inside front and back covers with the booklet, which is slightly smaller in scale than the original, neatly slotting in-between. The elimination of the jewel cases does, however, means that some of the era-specific images from the original sets have been lost.

Again, there is no change to the musical content.

This further European re-issue of The Life And Crimes Of Alice Cooper features further rationalised packaging, with the case considerably smaller than the previous Media Book and box sets (see comparative image below).

This version also has a squarer design than the other editions, so more of the stone wall is seen. Also, the booklet is now fixed to the case so you have to hold the whole thing if you want to read it (not ideal at all).

Again, there is no change to the musical content.