The Hollywood Vampires is a 'Supergroup' formed in 2015 by Alice Cooper, actor Johnny Depp and Aerosmith's Joe Perry. The group's name relates to the high profile Los Angeles-based drinking club that Alice formed in the early 1970's and which featured the likes of John Lennon and Keith Moon.

Alice is the lead vocalist, with Depp and Perry sharing lead and rhythm guitar. The group also features touring musicians, which have included Tommy Henriksen, Glen Sobel and Duff McKagen plus several others.

To date the Hollywood Vampires have released 2 albums, the self-titled Hollywood Vampires in 2015 and Rise in 2019. The former is mainly a covers album but with a few original tracks, whereas Rise is almost the reverse with plenty of all-new material.

School's Out / Another Brick In The Wall Promotional CD

This UK promotional CD of Hollywood Vampires comes in a simple paper sleeve and features the radio edit of School's Out / Another Brick In The Wall only (the disc is a blue CD-R type offering).

At 4 minutes and 6 seconds, this track is about 1 minute shorter than the album version with slightly shorter versions of School's Out either side of the Another Brick In The Wall interlude. Interestingly, Another Brick In The Wall starts straight after the "We might not come back at all" verse, rather than the instrumental section of the album version. The join isn't quite as seamless but it still just about works.

Both the rear of the sleeve and CD state 'FOR PROMOTIONAL USE ONLY. NOT FOR SALE'.

This European CD version of Hollywood Vampires comes in a jewel cases (complete with sticker on the front, listing the band and their special guests) and features a booklet containing a 5-page introduction by Bernie Taupin, track listings and credits. The CD has the 14 standard tracks, including the originals Raise The Dead and My Dead Drunk Friends plus Sir Christopher Lee's spoken introduction.

This Japanese CD version of Hollywood Vampires comes in a jewel case featuring an Obi strip and is almost identical to the above version. The CD is slightly different though with less of a silver edge. More importantly this version features the additional track I'm A Boy, which appears as Track 11.

The booklet is identical to the above version only with the addition of the details for the bonus track. An additional black and white booklet in Japanese is also provided.

Being an SHM version the audio (apparently) sounds louder and crisper than the standard UK versions so this is probably worth picking up and using as your master copy for ripping to your MP3 device.

This European vinyl version of Hollywood Vampires comes in a gatefold sleeve and features two black discs, which contain the same tracks as the standard CD album (above). Inside the sleeve is the introduction by Bernie Taupin plus the track listings and credits from the CD version booklet. 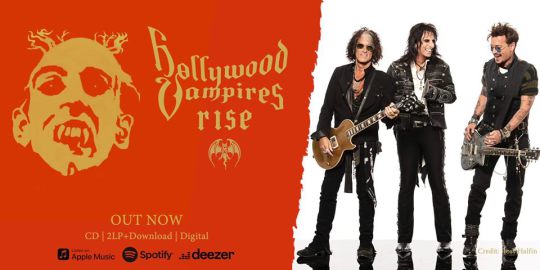 This French promotional three-track CD features a simple card sleeve and includes Who's Laughing Now, The Boogieman Surprise and Heroes (all from the Rise album). Inside is an unlabelled blue CD-R.

This 'Limited Edition' European version of Rise on CD features a box containing the widely released 'Digipak' CD plus a Rise-themed T-shirt. This is very similar to the Paranormal release by Ear Music in 2017 only that the shirt size this time is large rather than extra-large (a very sensible change!).

The 20-page booklet features track listings, lyrics and credits plus a variety of images of the group (both posed and in concert).

This 'Limited Edition' Japanese CD version of Rise comes in a triple jewel case and includes two bonus discs featuring the Hollywood Vampire's live performance in Lisbon, Portugal on 27th May 2016. This was obviously before Rise was released so the 21 song setlist, provided below, features material from the first Hollywood Vampires album only (plus additional covers, like 20th Century Boy, Come Together and Ace Of Spades):

Although nothing else notable is provided (just an 'Obi Strip' and additional black and white booklet containing only Japanese text) the live tracks make it a worthwhile investment. For information, the colour booklet is the same as the European version (above) but features a different cover.

This European vinyl version of Rise comes in a gatefold sleeve and features two black 180 gram discs, which contain the same tracks as the standard CD album (above). Inside the gatefold sleeve are credits and an image of the group whilst the vinyl sleeves feature track listings and images. Also provided is a handy code to download the album in digital format.

This 'Limited Edition' European vinyl version of Rise is exactly the same as the black version (above) only that it features translucent orange / red vinyl discs, an alternative hype sticker on the front and a different barcode on the back (that is stuck over the original one). The code number of this release (above) remains the same on the vinyl stickers though.

This further 'Limited Edition' European vinyl version of Rise is exactly the same as the black version (above) only that it features very cool translucent glow-in-the-dark discs, an alternative hype sticker on the front and a different barcode on the back (that is stuck over the original one). The code number of this release (above) remains the same on the vinyl stickers though. These look great spinning round with the lights turned off!

This is a popped stage-used balloon from the Hollywood Vampires concert at London Wembley Arena on Wednesday 20th June 2018.

A whole load of them came down from the ceiling during the School's Out encore, with many of them landing on the stage and being popped by Alice's dagger.