On Wednesday 20th June 2018, Alice’s side project, The Hollywood Vampires, performed their first ever live show in London. The stellar line-up meant that this was a show not-to-be-missed so it was a no-brainer to make the trip up from the West Country on a sweltering summers day.

I make no secret of the fact that I’m not a massive fan of Wembley Arena. Despite the name, it shares little in common with the majestic, world famous, football venue that it sits adjacent to. It’s basically just a soulless aircraft hangar so the onus is always on the performing bands to make it a memorable night, as the venue certainly won’t!

The other thing going against the Vampires that night was that this was an all-seated affair with the proximity of fans based on the depth of their pockets rather than necessarily their passion for the band (as is often the case these days, seats at the front were typically only available to ‘VIPs’ willing to spend the best part of £1,000 to see the band close-up and meet them afterwards for photos and autographs). After much searching, my wife and I were able to get reasonably priced seats in Row 11 just off-centre, which was as good as we could have hoped for.

Walking around the venue beforehand, it was evident that the audience was quite different to that of a normal Alice concert. Lots of people were wearing shirts of other bands, the average age seemed a little lower, and it appeared clear that people were here for curiosity reasons as much as the entertainment. 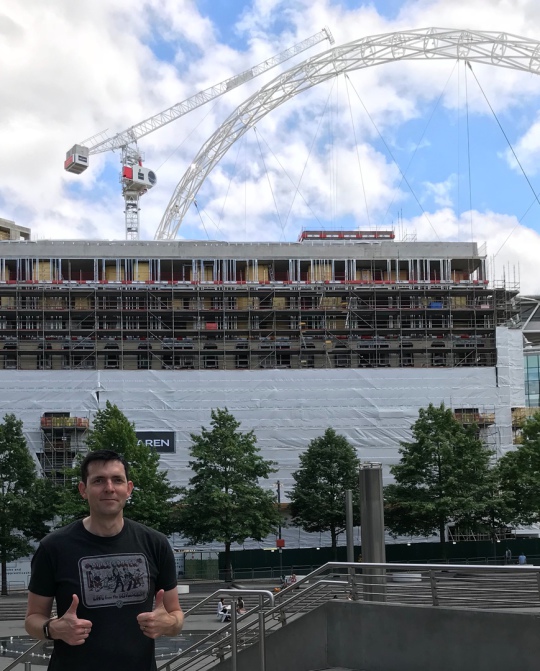 Outside The Venue
The evening’s triple bill of performances kicked off with English punk rock stalwarts The Damned. Best known for songs like Eloise and New Rose, their lead singer Dave Vanian gave a high energy performance and needed no encouragement to jump into the crowd and parade around the floor with the audience.

Next up was The Darkness, who exploded onto the UK music scene with 2003’s Permission To Land album. Introduced by The Foo Fighters drummer Taylor Hawkins, they powered out an unashamedly brash set including the likes of Solid Gold, Growing On Me, Love Is Only A Feeling and, of course, their British Number 2 hit I Believe In A Thing Called Love. Lead singer Justin Hawkins (no relation to Taylor Hawkins by the way) was in fine high-pitched voice and clearly enjoyed himself in front of the large gathering Wembley crowd. Kudos to him for performing a handstand in front of the drum-riser. 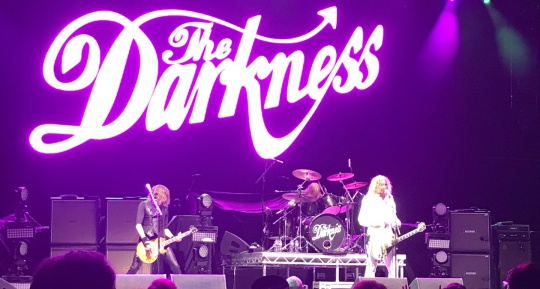 With the support acts over, everyone was ready for the main event. At this point, the inevitable surge of people without tickets for the front area begun with hordes of people beginning to line the clearways between the rows of seats. Thankfully though, the often maligned Wembley security did a good job of sending them away meaning that sightlines to the stage remained generally very good throughout (I’m quite tall, which really helps).

As the lights dimmed, atmospheric music begun and smoke poured onto the stage followed by a vocal extract from Sir Christopher Lee’s booming introduction to their debut album. Without further ado, Alice’s current touring band drummer, Glen Sobel, appears followed closely by Aerosmith’s Joe Perry who launches into a guitar solo. Before long, they are joined on stage by Alice’s other current touring band member, guitarist Tommy Henriksen plus keyboard player Buck Johnson and Chris Wyse on bass.

The crowd wait in anticipation and, seconds later, out walks movie superstar Johnny Depp with his guitar, followed seconds later by a full on Alice-looking Alice. The Vampires serve an instant curveball by launching into the all-new song I Want My Now, a catchy rocker that draws a good reaction. 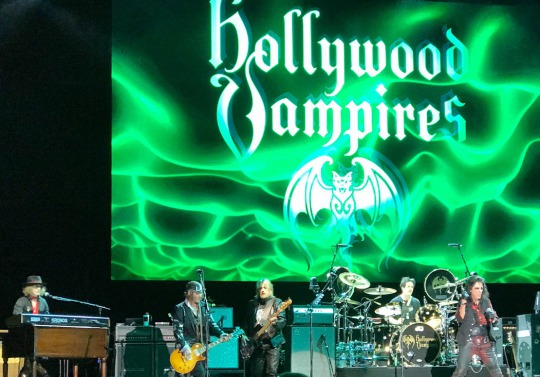 With the show underway, it’s hard not to be instantly drawn to Johnny Depp. One of the most famous people on the planet, he has good stage presence and his choice of attire this night made him look very similar to probably his most well-known film character, Captain Jack Sparrow from the Pirates Of the Caribbean films. Unfortunately, almost everyone else appeared to be in a similar boat and that meant a sea of smart phones filming for the opening parts of the show. 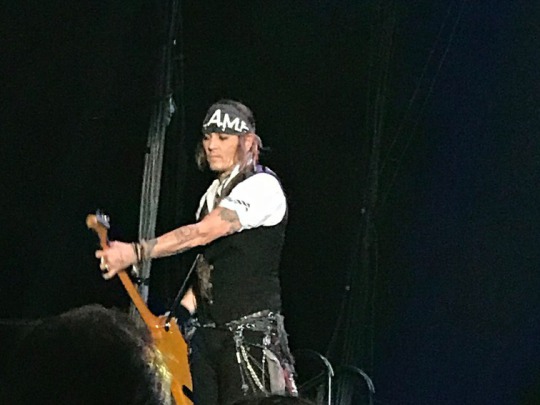 Next up is the excellent original song, Raise The Dead, which not only is the stand-out track for me on their debut album, but also one of my favourite songs involving Alice in recent years. After a high-octane cover of Spirit’s I Got A Line On You, the other original song from the debut album, My Dead Drunk Friends, draws a further good reaction from the crowd.

The rest of the first segment of the show is largely comprised of covers, with a notable reaction experienced during Ace Of Spades (where we see images of England’s very own recently deceased Lemmy Kilmister on the large screen at the back). The highlight though, is the bonus track from the debut album, the Johnny Depp penned As Bad As I Am, which sounds really good live. Another promising new track, The Boogieman Surprise, is played and I’m looking forward to hearing this again when the new album comes out in 2019.

As the show continues, we are treated to a fantastic rendition of the Alice Cooper Group classic I’m Eighteen. We were also treated to a genuinely impressive drum solo by Glen Sobel, who is easily one of the best and most charismatic drummers in the music business. 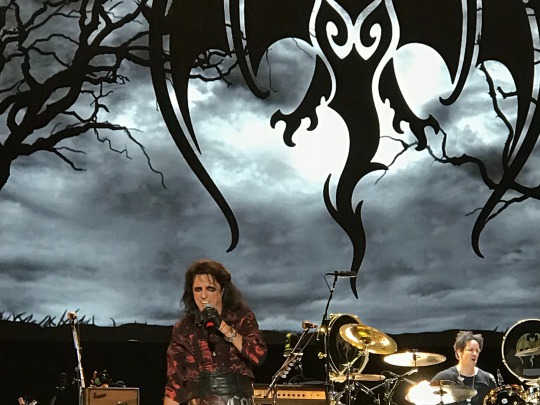 It was clear that Johnny Depp is by no means a substandard guitar player.  He’s also a pretty decent vocalist and it was both a surprise and delight to hear him lead on 2 major highlights of the night. First off, was an excellent and thought-provoking cover of People Who Died (originally by the Jim Carroll Band). Again, the screen at the back was put to excellent use as images of fallen music stars such as Jimmy Hendrix, Joey Ramone, Prince and David Bowie appeared. And speaking of Bowie, a profound cover of his hit Heroes saw rapturous cheering from the historically sterile Wembley crowd as Depp again took the lead. Alice remained on stage for both songs, but never looks fully at ease when he’s not the main man.

The night ended with a predictable, but brilliantly delivered version of School’s Out. Unbeknown to many, hundreds of red and white Hollywood Vampires balloons had been raised to the venue’s ceiling before the show. They dropped towards the end of the song and consumed both the crowd and the stage, despite Alice’s best efforts to pop them with a dagger!  A burst balloon landed near me so I grabbed it as a souvenir of the show. 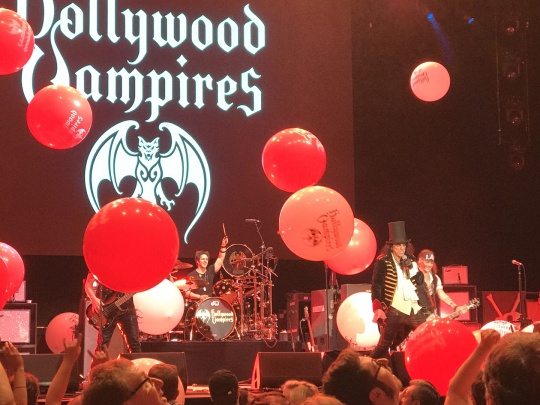 I’d previously not been fully on-board with the Hollywood Vampires project, but I left a big fan having been thoroughly entertained for the best part of 2 hours. The main point to reflect on is that Alice’s solo shows have been rather similar for the last 6 years now (i.e. somewhat repetitive presentation and setlists). The UK shows last Autumn aside, where we were treated to seeing the surviving Group members perform in the UK for the first time in about 40 years, this was the freshest thing that Alice has been involved in for a long time. The crowd enjoyed it, Alice seemed to enjoy it and it completely justified the time, effort and expense of attending the show.

The night has not only re-invigorated my love for Alice but has also made me want to see more from the Hollywood Vampires, both in live and recorded form. 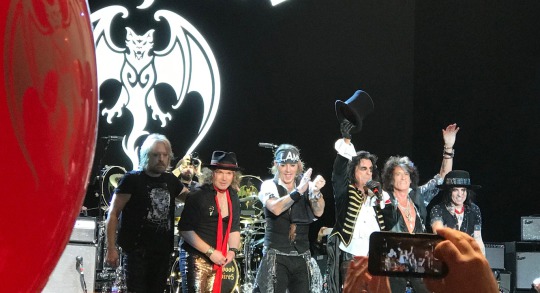 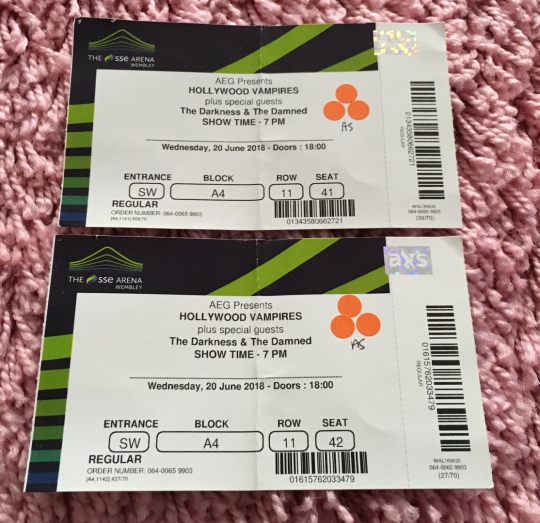 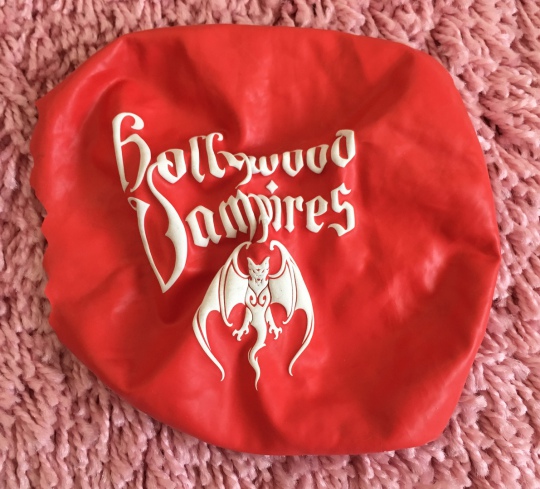