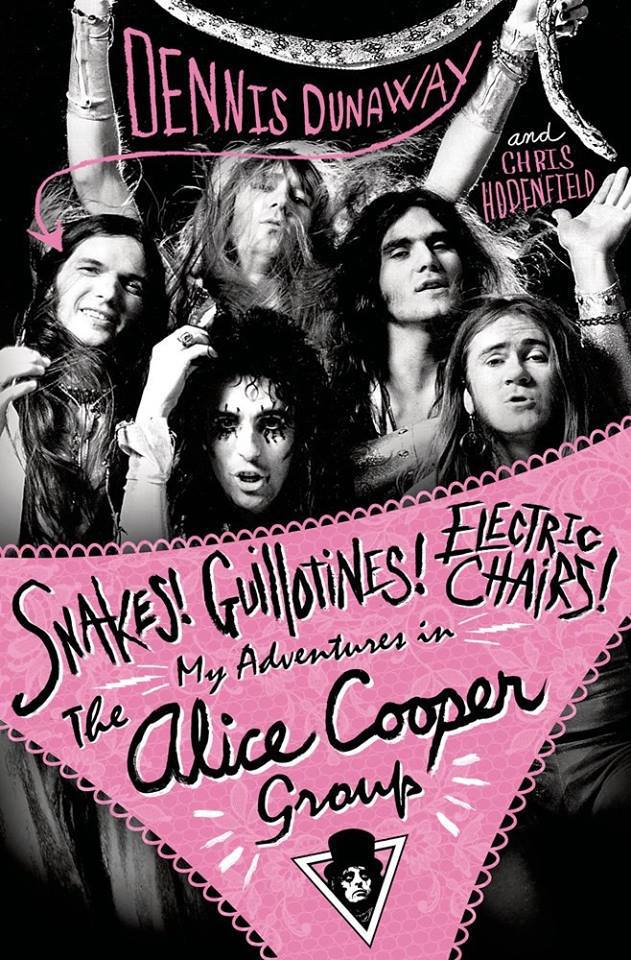 'Snakes! Guillotines! Electric Chairs!, My Adventures In The Alice Cooper Group' was released in 2015 and is a personal account of the original group by founding member / bassist Dennis Dunaway (with support from entertainment journalist Chris Hodenfield).  The book, as you would expect, mainly focuses on the period that the group, and its former incarnations, was active (about 1964 to 1974) but there are also chapters devoted towards the decline of Glen Buxton, Alice's struggles with drug addiction (in the 1980's) and the group's triumphant induction into the Rock and Roll Hall of Fame (2011).

Something that comes across very quickly is that Dennis writes with what feels like a refreshing tone of honesty, this endears himself to the reader and gives them the confidence that what's written is as close to the truth as you are ever likely to find given the passing of time.  This is best evidenced through vivid memories of the young Glen Buxton and his first impression of future brother-in-law Neal Smith.  Another good pointer is that Dennis is happy to share some of his less-than-successful moments as well the iconic ones.  It's fair to say that Dennis is a regular guy with little or no ego!

Returning to Glen, he is a source of much amusement as you read the book.  There are lots of funny anecdotes about him, this includes the time he ashed a cigarette down the front of a cowgirl's cleavage and 'getting down to business' in a cemetery....... on top of somebody's grave!  He sounded like a hell of a laugh to be around!

It is clear that Dennis and Vince were, first and foremost, great pals in the early years.  Brought together through a mutual love of art and surrealism, it is fair to say that they shared a lot in common and this is something that held them in good stead for the journey that lay ahead.  We also get an appreciation that Vince was, even back then, someone who was happy to exaggerate stories in order to make them appeal better to people.

Dennis also details that Vince was very much the key driver of the band's theatrical approach.  He appeared to have firm principles about the importance of this method of presentation, which in turn inspired the likes of Dennis and Michael Bruce to provide meaningful and highly innovative input.

At this point, we must appreciate that this is also something of an autobiography.  Dennis is an interesting and charismatic star himself and some of the book's high points are where he tells us about his own life.  His friendship, relationship and ultimate marriage to Cindy Smith (the sister of Neal Smith of course) is fascinating and provides a warm side-story to the rest of the material provided.  Much like the more commonly known Alice-Sheryl dream team, Dennis and "blonde angel" Cindy come across as a rock solid combination who have survived the test of time, including the perils of life on the road.  Not only that but Cindy almost sounds like the unofficial 6th member of the group, providing costume design, creative ideas and emotional support.  How much did she contribute to the success of Alice Cooper?  Whatever the answer, she was a definite keeper!

Vince is confirmed as the person who thought of the Alice Cooper name but Dennis also states that all members (including Vince) agreed that it would be the name of the band and not an individual.  Interestingly, Vince isn't referred to as Alice until page 93 although I didn't notice until page 95.  In a way this kind of reflects how the transition from a band named Alice Cooper to an individual named Alice Cooper, who stole a lot of the limelight, went under the radar!

A telling entry is the description of the time that the band performed an impromptu audition at Mercury Records.  Their performance of Talk Talk was well received but with the condition that the singer was replaced.  Fierce band loyalty and unshakeable confidence meant that the offer was rejected on the spot.  Dennis then describes on the next page how Vince would record Talk Talk (in 1980) with the band that replaced the original members.  Ouch!

The group's extreme work ethic shines throughout the book with the slippery road to the top highlighted in all its unglamorous detail.  Night-after-night of gigs, crisscrossing the US, violence, being shafted for performance fees, it's all here.  Of course, there were plus sides too and Dennis is happy to share his and the rest of the group's encounters with numerous groupies!  The invaluable contribution of Bob Ezrin in the group's success is clearly demonstrated with an appreciation shown that all the will in the world will get you far but to make it big you sometimes need outside help to refine and polish what you have to offer.

It is good to have the Frank Zappa audition story properly clarified.  Firstly, Dennis states that Miss Christine of the GTO's simply invited Alice and the band to come over to his, and her, house (not to audition) and secondly it was at 09:00 and not 07:00 as often stated by Alice.  There is also the highly amusing story of Zappa's frankly terrible idea to rename the band Alice Cookies!

The demise of the group (or 'shoving out' as Dennis puts it) is covered in considerable detail in a 6-page chapter, although hints of the problems that contributed to it can be found well in advance.  Nothing really new is provided but this is probably the best overall account available.  In particular, we learn more about Alice's elevated position and special treatment (and how much he liked it), the extent of both Alice and Glen's drinking problems, friction between Alice and the rest of the group and the solo aspirations of several members.  Dennis also categorically denies that the split was due to differences in opinions, as outlined by the Battle Axe production (intended for the group, but then to become the album by the break-away 'Billion Dollar Babies').  As we all appreciate, the break-up was by all accounts a complicated affair but Dennis beautifully illustrates it in a simple way when he remarks that the group was a "two-headed snake with one head destined for amputation".

The book is dedicated to the memory of the late and great Glen Buxton.  It is only after reading this book that you begin to appreciate the terrible decline of such a talented and vibrant person.  It is hard not to hold back a tear as you learn of the way he lived in the final years of his life.

In contrast to this is the story of Alice's salvation against his now commonly known 80's drug addictions.  Dennis' description of this period is particularly dark with references made to the state that Alice's body was in and just how close to death he probably was.

Modern day Dennis comes across as someone who recognises and appreciates all the fantastic things that he and the rest of the group achieved in the past, rather than someone who is outwardly bitter at what didn't transpire (and the reasons for it).  That said, there are clearly still raw feelings towards perceived (and totally understandable) injustices that he has had to endure over the years.  Most notably, is the award to 'Alice Cooper' of a star on the Hollywood Walk Of Fame in 2003.  I think it's fair to say that he is deeply unhappy about that!

Like all good stories, however, there is a happy ending (of sorts).  The Rock and Roll Hall of Fame induction in 2011 reads of a complete triumph.  Not only because it was long overdue but also because it appears to have been a bit of watershed moment for Dennis.  Confirmation that the contributions of every group member should still stand shoulder-to-shoulder with Alice, confirmation that Alice never really bettered in 40 years what they did on 10 years and confirmation that the world appreciates the musical and cultural impact that they provided all that time ago.  What a shame that there was one member missing though, a bittersweet moment if ever there was one.

I think the induction also helped to build bridges between the group and Bob Ezrin it's great that there have been some recording and appearances together since around that time.  Dennis actually speaks quite kindly of Alice and even acknowledges that his continual touring helps with sales of their music.  Whilst Dennis may not be healed; he at least appears to have learned to live with his wounds and spends more time looking forwards than behind.

I cannot speak highly enough of this book, it's open, sincere and above all fun.  If you're a fan of Alice Cooper the group, Alice Cooper the man, both or you just want to read a great story then this is an essential purchase. Thank you Dennis! 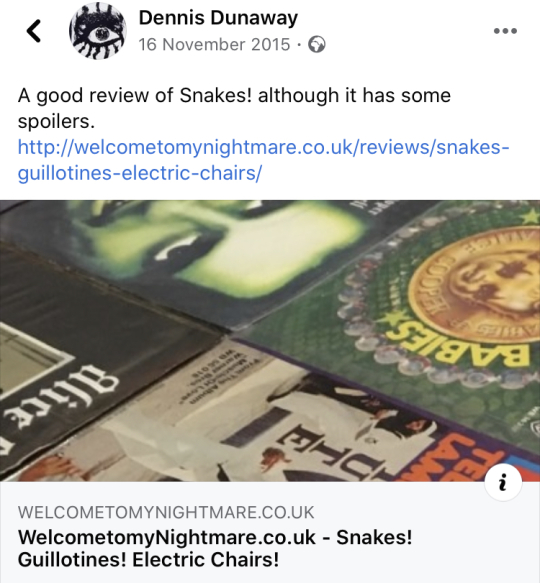